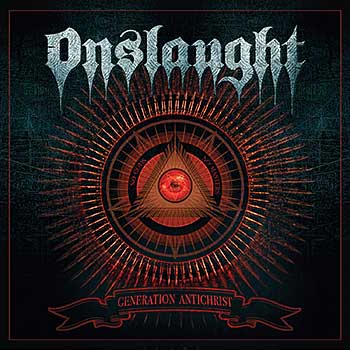 OLD SCHOOL THRASH: By fusing the aggression of hardcore punk in the vein of Discharge with its love for Motörhead, UK thrashers Onslaught have been flying its brand of metal for three-plus decades. Formed in Bristol, England in 1982, Onslaught began as a punk influenced band with a metallic edge on its raw 1986 debut album Power From Hell, while follow-up album The Force displayed more of a death/black metal sound before shaping into the lethal thrash juggernaut it has become today.

Brief opener “Rise to Power” sets the tone before unleashing into the full-on attack of “Strike Fast Strike Hard.” From the politically influenced “Bow Down to the Clowns,” to the relentless rhythmic thrust of the title track, to the vicious punk attitude/aggressive thrash metal hybrid of “Addicted to the Smell of Death,” Onslaught performs like a ruthless killing machine.

During the band’s early days, their overt occult/Satanic references stood out significantly, and it’s safe to say their anti-religious stance remains crystal clear on tracks such as “Religiousuicide” and the crushing title track “Generation Antichrist.” Album closer “A Perfect Day to Die” is an homage to one of the band’s biggest influences in Motörhead, complete with a Lemmy-esque bass line and a classic rhythmic gallop.

Generation Antichrist is fast, heavy and loud! After 35-plus years, Onslaught remains a true symbol of endurance and perseverance in the thrash metal scene. ~ Kelley Simms