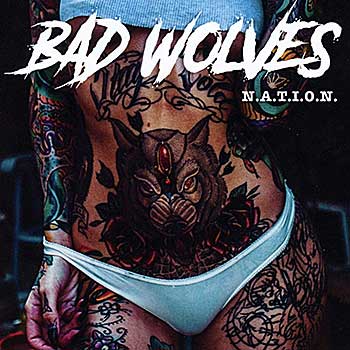 A NATION REBORN: Despite the fact that Los Angeles supergroup Bad Wolves has only been around for a few short years, they have considerable experience among the individuals that comprise the band. It’s this experience that produces albums like their latest, N.A.T.I.O.N., a fantastic throwback to the era of bands like Chevelle and Breaking Benjamin that juxtaposed chugging guitars with radio ready vocals. Frontman Tommy Vext shines as he always does on the requisite ballads, “Better Off This Way” and “Sober,” showing off a richness that surpasses many of his peers (to say nothing of the twangy, Southern-tinged style he adopts on “No Messiah”).

Sandwiched between those two solos, however, is “Foe or Friend,” arguably the harshest track on the record, which combines the brutal strings of Doc Coyle and Chris Cain with rah-rah cheers that bring back fond memories of Marilyn Manson’s “Fight Song.” Bad Wolves is at their best, however, when they’re splitting the difference on songs like “Heaven So Heartless” and the album’s standout track, “The Consumerist.” The particular brand of metal that Bad Wolves creates is accessible, but never pandering, providing the best of everything that they include on the album. For as beautifully as the world saw Vext sing on last year’s cover of The Cranberries’ “Zombie,” he can scream with the best of them, and it’s that dichotomy that makes Bad Wolves one of the most compelling groups around today. ~ Tyler Davidson