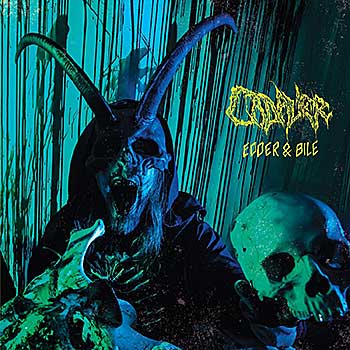 BACK WITH BITE: Man, talk about a welcome return. Norway’s Cadaver was always sort of a welcomed odd man out when it came to the international death metal scene of the early 90s. The band’s two albums from this time weren’t your average thrash influenced hybrids, nor were they leaning into the American style flourishing in Florida or New York.

Instead, Cadaver always seemed very Voivod-ian in their approach, impossible to pigeonhole yet thoroughly heavy, energetic, and full of interesting ideas. Hallucinating Anxiety and …In Pains were cult albums in a way, and the band took a break after the release of the latter to move in a slightly more black metal direction with the Cadaver Inc. project. Necrosis followed under the Cadaver moniker once again in 2004, and then…silence.

This is why Edder & Bile hits all the right nostalgic notes right from the get-go, while also possessing a freshness that sets it apart from any lame cash grab. The black metal influences from the Cadaver Inc. period are still there, mainly in a Satyricon mode, which makes sense since Cadaver’s main man Anders Odden spent time touring with the Norwegian icons. However, the street level coldness that defined Cadaver Inc. on Discipline is replaced by a slightly warmer sound that really celebrates the riff—a measured and thoughtful approach that pushes memorable songwriting to the front like never before.

Edder & Bile doesn’t fool around with anything too cerebral, however, preferring instead to blast out 10 songs in just over a half hour’s time. This explosive brevity is a little surprising, but welcomed, as there’s really no fat to trim. Dirk Verbeuren’s reliably insane drumming anchors it all together with grooves that make each song better without anything superfluously flashy, but it’s Odden’s creativity that should really be celebrated. The riffs are angular, mean, and perversely catchy at times—melodic without being upbeat and brutal in a manner that feels both contemporary and classic. The title track is bold and anthemic, while album closer “Let Me Burn” is a jam that runs the gamut from creepy to thrashy to blast beat city.

Voivod and Slayer will always be driving forces behind Cadaver’s death metal attack, but the Edder & Bile remains a startlingly good example of how the band took those influences, crafted something fresh and new in the 90s, and are still doing it shockingly well today. It’s not black metal. It’s not death metal. It just sounds like Cadaver. ~ George Pacheco