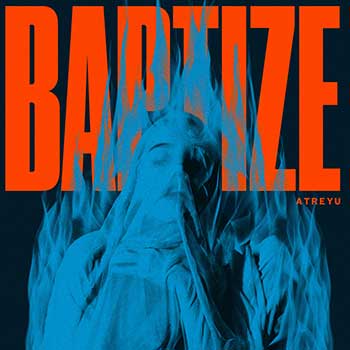 HEAVY ROCK POP: Atreyu has certainly evolved since their early albums, such as Suicide Notes and Butterfly Kisses and The Curse, and fans that want a combination of their heavier sound mixed with their current pop rock sound will be satisfied with their new album, Baptize, especially with guest spots from rock and metal heavyweights.

What does Baptize sound like with drummer Brandon Saller now the main frontman and bassist Marc “Porter” McKnight introducing his harsh vocals? While former vocalist Alex Varkatsas’ vocals coined the band’s identity, Porter gives Atreyu new life. His vocals are higher pitched and more chant-like, and it works. Saller’s signature vocals still give Atreyu the authenticity the band has held for the past 20 years, and his voice dominates most of the songs on this album that sees Atreyu mixing more of their heavy sound with their pop influences.

The album starts off with the intro, “Strange Powers of Prophecy,” and while the transition into the title track feels a bit awkward, the power of “Baptize” is more than enough to get fans moving with its open guitars, stomping drums, and catchy chorus. “Save Us” is another perfect rock anthem that reflects on the past year. The song not only conveys the difficult emotions, but leaves us on a positive note. “Untouchable,” featuring Papa Roach’s easily identifiable singer Jacoby Shaddix, has a very unique energy. The beginning is very catchy and then gets heavier towards the end, making it a potential fan favorite.

“Oblivion,” featuring Trivium vocalist and guitarist Matt Heafy, is a toned down ode to the earlier days of Atreyu, and McKnight makes his voice known here, unleashing growls of all pitches. His voice injects a higher level of heaviness into the song, which along with the guitars, breathes new life into the album. The album slows down with “Stay,” with Saller’s beautiful vocal melodies and higher octave pitches, until the song becomes more intense with drums and guitars. Baptize ends with “Warrior,” Atreyu’s collaboration with Blink-182 drummer Travis Barker. The marching drums don’t appear until the middle of the song, which sounds like a classic Atreyu track other than Barker’s playing and the uplifting lyrics.

Atreyu went through many changes in the past year and Baptize reflects this. The band still holds onto its authenticity, and while there are powerful songs here, it’s mixed with a few weaker ones. Many of the songs do sound similar, and fans will likely have different reactions, but should still give Baptize a chance. ~ Stephanie Jensen