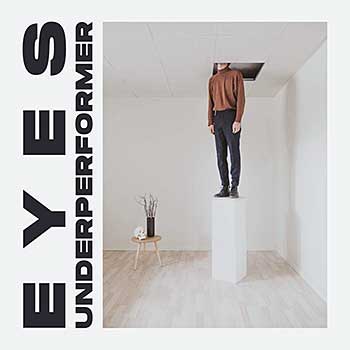 TWISTED HARDCORE/NOISE ROCK: The bio accompanying the debut album from this Copenhagen collective describes the theme as such: “In its essence, Underperformer is a narrative about becoming an adult and having a hard time adjusting to the role it implies. About feeling discontent with one self and where one is in life; feeling like you’re always busy and have your hands full, but never actually accomplish anything—feeling like an Underperformer.”

Reading this brings me back to the beginning of the pandemic shutdown when proponents of workaholic/Type A/hustle culture would find time during their busy schedule of learning a new language, sharpening their gourmet kitchen skills, hosting their new podcast, refining their résumés, and working on their washboard abs to go online and lay into those who weren’t using the lockdown to learn a new language, sharpen their gourmet kitchen skills, host a new podcast, refine their resumes, and work on washboard abs. Personally, instead of feeling like I always had to be “doing something,” I took a greater sense of calm and accomplishment to rolling out of bed (or not), checking off the must-dos (because even the most inert amongst us have must-dos) before retiring to watch all the Rocky or Smoky and the Bandit movies in succession, only stopping to microwave a bowl of Chef Boyardee’s finest tomato flavored gruel. I’m extrapolating upon Eyes’ message to include the idea that just because you’re not perpetually moving at a million miles of accomplishment an hour, you’re not a failure. Ironically, the band brokers this line of messaging with an accomplished wall of sound that has obvious thought behind it and meticulous care placed in its creation and execution.

If there’s a Venn Diagram using noise rock, hardcore, sludge, whatever you call what Cows were doing and whatever you call what Melvins are doing as its elements, then this Danish five piece would be mayoralty candidates for the overlapping area. That they take snippets of influence from a number of different subgenres is obvious—one minute it’s Amphetamine Reptile noise rock (“Verge”), the next it’s Converge/Daughters (“Distance,” title track), the next is experimental/avant-garde guitar wrangling (“Off”), then some moody abrasiveness (“Voiceswhispersecretsandspeakonlytruths”), then the energy of classic Refused (“Crutches”) and even a bit of lunkheaded, breakdown happy metalcore (“Choke”)—but what stands out is how the album is run through Eyes’ own wringer.

Underperformer is not only an impressive synthesis of subgenre variety, but the sound achieved through the recording, mixing, and mastering is streamlined, singular, and not as delirious or haphazard as the range of influences might indicate. Moments remain where the experimental edges are a bit too sharp, though even potential miscues are buffered by the fact that the average song length is in the three minute range. Eyes doesn’t overstay or draw out their welcome, even during moments of rookie inexperience, and have created a buzzing din that should appeal to those lying on the couch looking forward to reruns of Family Feud, those using Babel to learn Icelandic, and all fans of aggressive noisy hardcore in between. ~ Kevin Stewart-Panko