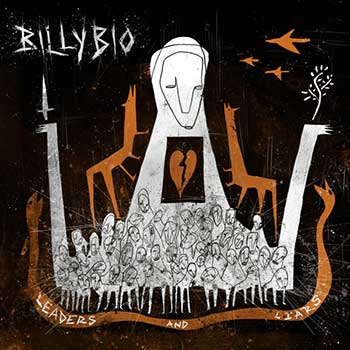 THE RIGHT SIDE OF THE WRONG SIDE OF THE TRACKS: So, Biohazard apparently still exists. Despite not having released an album since 2012’s Reborn in Defiance, you can still obtain Bio-merch, including protective face masks emblazoned with the universal biohazard symbol/band logo that were cleverly made available at the beginning of the pandemic. This goes to show there’s some present-day relevance to the name, even if there’s been no music for a decade (and no music anyone but hardcore Bio-heads would recognize for much longer). Then again, spend a half second on the internet and you can find a Jimi Hendrix hoodie. So, being able to buy merch by an artist/band isn’t exactly an airtight indicator of recent activity.

In the interim, vocalist/guitarist Billy Graziadei has branched out on his own with his BillyBio project. Leaders and Liars is the second under the BillyBio banner, and it’s an album that grabs from all eras and phases of its creator’s record collection, musical development, and influences. Sure, it may start off with the one-two jab of “Black Out” and “Fallen Empires,” both of which could have been the lead-off single for any Biohazard album you choose to name (or recall, as per the previous paragraph), but Graziadei quickly makes moves towards full-on Lower East Side NYHC (“Lost Horizon”), rocking out in serious Sick of It All tribute mode (title track), Agnostic Front inspired, tattooed fist in the air sing-alongs (“One Life to Live”), a track that would have had Pete Steele attempting to suppress a smile (“Turn the Wounds”), and West Coast, Fat Wreck Chords/Bad Religion melodi-punk (“Our Scene”). Heck, there’s even a bit of a nod to 80s metal (“Cyanide”).

The bright, snappy, and powerful production and the direct thrust of Graziadei’s gravelly vocals help elevate the energy of these songs out from under the grime sometimes associated with hardcore punk of the New York accented variety. The songs are generally short, to the point, and undoubtedly catchy, which works to make interludes like “Remission,” “Sheepdog,” and “Just the Sun” seem like unnecessary momentum drainers. As well, bloated overwrought tracks like “Black Out” and “Enough” (despite the latter’s otherwise brilliant hardcore riffing, rally cry chorus, and screeching noise outro) standout for being longer than need be.

Aside from that, Leaders and Liars is a powerful solo statement, not only for its own diversity, robustness, and mark of individuation for its creator, but also because it drops a big ol’ hint about where the creative husk behind Biohazard lies, dormant as it may be. ~ Kevin Stewart-Panko