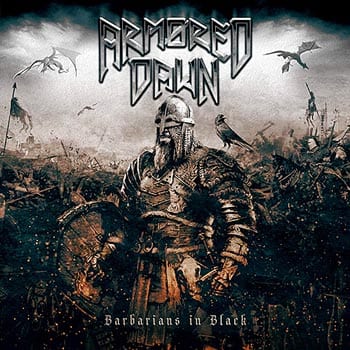 POWER METAL: In spite of all the hype AFM has generated in order to sell records, recoup advance money, and ultimately have Armored Dawn existing as indentured servants for the duration of its recently signed contract, these Brazilians are actually quite good at what they do. The sextet exists as a prime example of innovation in power metal that doesn’t involve hopping it up on energy drinks (DragonForce) or hoping nobody else notices what obscure records are being plagiarized (almost everyone else). After the release of their independent and grammatically fucked debut, Power of Warrior, the São Paulo band caught enough industry ears to score spots sharing stages with obvious influences like Megadeth, Symphony X, Fates Warning, Rhapsody, and Sabaton, which caused a South American stir and eventually got them over to Europe for a short while. Their sound uses the sugary melodies and fictional battle-ready feel commonly associated with the genre and injects a brooding edge and complemented with enough virtuosic soling to keep the fret watchers happy. A variety of influences nudge their way into the foundation. “Survivor” uses 80s hairspray rock. “Beware of the Dragon” has some Savatage style prog. “Men of Odin” is about melodic Swe-death. There’s even some Mastodon in “Gods of Metal.” And however much the uncalled for ballad “Sail Away” stalls the mood, it can’t slow the adventurousness embarked upon throughout the rest of this album. ~ Kevin Stewart-Panko