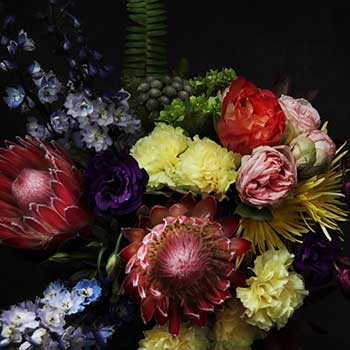 DARK RHYTHMS: Whether you’re a fan of 00s hardcore or have a not so guilty pleasure of dark synth-driven music, you have undoubtedly brushed the shoulder of Wes Eisold’s work. Cold Cave began in 2007 and has since become a household name in the world of darkwave synth. You may have noticed a resurgence in the genre over the past few years as aging punk musicians have found new ways to express themselves beyond pure aggression. Eisold has stayed light years ahead of that curve for well over a decade.

Fresh off of the 10 year anniversary of Cold Cave’s seminal album Cherish the Light Years, Eisold and longtime contributor Amy Lee have released the project’s most cohesive and romantic release since 2011. Fate in Seven Lessons has something for longtime cult followers and curious listeners alike. This seven song album is littered with layers of dark rhythm, luminous synth leads, driving guitars, and mournfully catchy vocal hooks. Descriptive words will hardly do the album justice, as it can best be represented by the gloomy yet vibrant bouquet of blooming flowers that graces the cover.

The opening track, “Prayer from Nowhere,” sets the tone for the entire album with an instrumentation that is nothing short of provocative. It becomes instantly clear that Cold Cave has figured out a way to illustrate raw sensual fantasy in a way that is both androgynous and arousing. Eisold’s vocal delivery is the true selling point, as the narrative glides between a lust for love and an ascension to the afterlife.

The album doesn’t just offer sexy moods fit for dimly lit warehouse clubs. The lead single “Night Light” is truly the afterglow that follows any dark fantasy. The bouncing synth lead and playful dance beat will pair well with a visual of the summer sun reflecting from the rippling waves of your local body of water. This song is arguably one of the catchiest in the entire Cold Cave catalog and could be the summer goth anthem of 2021.

While those two songs happen to be the standout tracks, the rest of the album is pure in quality and variation. Each track offers something fresh while still giving subtle nods to older Cold Cave material. The more slow and chill tones of “Love is All” are complimentary to the epic force of the closer “Promised Land,” which is sure to be a fan favorite. The peaks and valleys of this album create an equal and opposite parallel that is as unexpected as it is fulfilling to the Cold Cave legacy.

It may be easy for new listeners and critics to compare Cold Cave to synth-driven predecessors like Depeche Mode and New Order, but it is important to note that Cold Cave is not purely influenced by 80s nostalgia. Eisold’s introspective lyrics reflect his journey through adulthood as an artist that is relatable in the modern world. Cold Cave often gives nods to those classic acts, but more often than not, Eisold and company can outshine them in approach and delivery. Fate in Seven Lessons is an instant classic for the genre and proof positive that Cold Cave is deserving of the crown. ~ Clint Gee