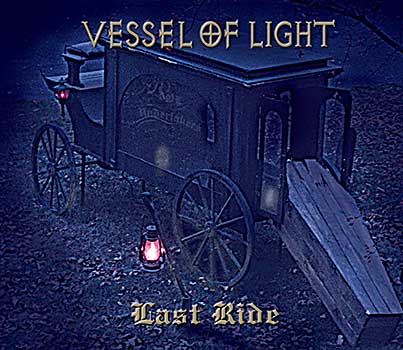 There’s a familiarity with each track, consisting of a big, meaty, downtuned riff combined with soaring vocal harmonies and a hooky melody line. Most of the tracks do a great job of reeling you in and keeping you there for the remainder of the song.

The title track kicks the record off with massive, Sabbathian doom-laden riffs and powerful rhythms consisting of a heavy low-end and menacing vocals, while the infectious Alice in Chains-esque vocal harmonies engulf the chorus. The terrifying “Torture King” will send chills up your spine with its frightening atmosphere and horror movie vibe, especially with the spooky synth melody finale. Tracks such as “Carving Station,” “In The Silence,” and “The Death of Innocence” explore more of the same similarities and keeps the listener engaged from front to back. Littered with dark lyrical themes based on true crime stories and fictional horror stories, Last Ride’s chilling atmosphere never ceases.

Although Vessel of Light has received generously favorable reviews from previous albums, hopefully the band can gain even more momentum with this release. Fans of this type of metal will easily become a Vessel of Light fan once they hear the album, as it’s a spooky and fun doom metal affair. ~ Kelley Simms