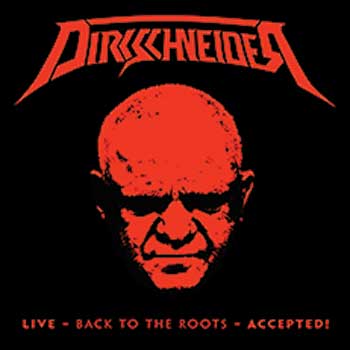 DIRKSCHNEIDER
Live – Back to the Roots – Accepted!

LOUD CLASSIC METAL: There are few frontmen in heavy metal as prolific as Udo Dirkschneider. Whether you love the sound that shaped the formative years of pioneering German metal outfit Accept, the one he carried on for decades with his solo project U.D.O., or loathe it, you can’t deny that Dirkschneider has earned his place in the pantheon of the greats. On Live – Back to the Roots – Accepted!, Dirkschneider and his band bid (an apparent) farewell to the Accept material of which Udo was a part of for 10 albums. The madness is immortalized with a live CD/DVD/Blu-ray during a memorable showcase in Brno, Czech Republic. For two plus hours Dirkschneider does what Dirkschneider does—produce shrill vocals, pouring out ounces of sweat and devotion, and rockin’ well past the point a 65-year-old person should be allowed. We’d expect nothing else from the iconic frontman, and though his range has shown signs of staggering, and fatigue is an inevitable byproduct of father time, Dirkschneider does his fans proud, belting out over two dozen Accept staples. Tried and true classics like “Balls to the Wall,” “I’m a Rebel,” and “Restless and Wild” earn a rabid response, and the dedicated audience hangs on every note from start to finish in a fine companion for any fan of a true metal legend. ~ Dillon Collins