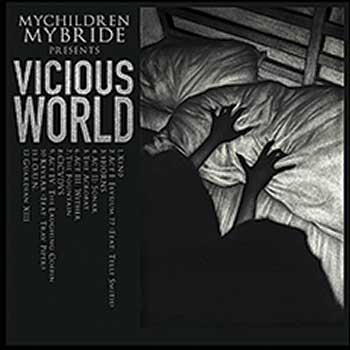 HEAVY DARK: And then there were two. Matthew Hasting and Robert Bloomfield reemerge after a fruitful five year hibernation to bring the most charmingly mystifying MyChildren MyBride record to date. Partnering with Travis Richter (From First to Last) at the boards, the band has entered a new era, one where simply producing content as a duo may serve their brand best. Vicious World is creepy, alien, and heavy as hell, with “The Fountain,” a beautiful instrumental interlude, giving the only reprieve from the horror movie feel of the record. Coming from a now played out scene of metalcore, MyChildren MyBride has avoided being another cautionary tale by crafting this star reaching opus that slides in right alongside the likes of Marilyn Manson and Korn. The expected chest pounding fare is present in “Thorns,” “The Acrobat,” and many more throughout, but the bar is raised by “CICVDVS” and “Act IV_The Laughing Coffin,” songs that feel like vampiric excerpts from the darkest corners of Edgar Allan Poe’s mind. Ever present are the trademark chugs and Hasting’s guttural vocals, firing on all cylinders as the duo explores ghostly chants on the majority of the tracks. Vicious World is an endearing experiment, replete with a dark majesty announcing a new chapter for a band long thought to have tapped out. ~ Jameson Ketchum