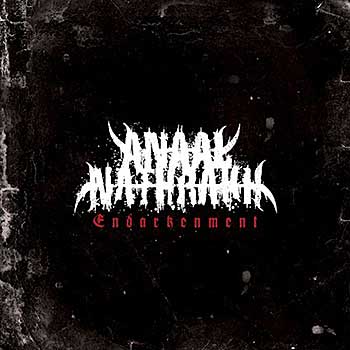 BLACKENED INDUSTRIALIZED GRIND: When you’ve built a career on crushing land speed records with drill press drum machines propelling guitars that careen by in a hail of next level static drenched distortion with vocals spitting philosophically erudite screeds about how the human condition breeds a justified misanthropy, there aren’t many extremities to push after 11 albums, unless teetering over into the realms of pure industrial noise is an option. It may not be a given to anyone who cries “sell-out” at the first sign of progression, change or difference, but these are bands we’re talking about, not Xerox machines. Though, considering the ongoing collapse of as life and liberty as we know it and the planet we’ve decimated in the process, one wouldn’t fault Dave “V.I.T.R.I.O.L.” Hunt and Mick “Irrumator” Kenney for being a Xerox machine for the unmitigated rehashing of sonic anger.

However, even mighty force noisemakers like this Birmingham/Los Angeles duo have chipped away at their own oppressive wall of calamity over the past few years, especially those albums coming in the second half of the 10s. Primarily, this has manifested in vocalist Hunt making much more liberal use of his crooning clean vocals with guitars occasionally straying from face melting velocities. On Endarkenment, these elements have been pitched and nurtured and have come to sit sidesaddle alongside the flurry of invective chaos that has defined Anaal Nathrakh since 1999.

The title track opener and “Create Art, Though the World May Perish” are prime examples as the frontman leads majestically anthemic choruses with his vocals symbolically standing on the edge of a snow peaked mountain top as guitars ululate and weep with various degrees of blaze and blues in the background. “The Age of Starlight Ends” sees the band doing its usual charge towards the end times but channeling Mercyful Fate in the bridges and Iron Maiden in the harmonized middle-eight in the process. One of the more dramatic moves comes with “Libidinous (A Pig with Cocks in its Eyes),” a halting piece with pedal picking riffs locked in with helicopter double bass patterns, flirtations with the golden age of industrial metal (i.e. early 90s), and a high-pitched King Diamond-esque wail that all adds up to a collision of Fear Factory, Ministry, and Fate.

The album’s progressive crowning achievement, however, is “Feeding the Death Machine,” which utilizes a riff not unfamiliar to fans of classic thrash angered up by the T-800’s titanium endoskeleton spun into a hyper-melodic two-part chorus—Hunt’s crinkled forehead vocalizations and emotive keyboard swells—with a shredding lead bringing it home. Arguably, one of the greatest moments of the Anaal Nathrakh canon.

At the same time the pair are expanding its width and breadth, there’s no scrimping on the inhospitableness. “Beyond Words” is bald black metal hatred and “Thus, Always, to Tyrants” might be the band’s most head-to-toe volley of brutality ever, existing as a brass knuckle haymaker to the throat that sears like a musical electrical fire with Hunt turning in a combined salute to the collective of former bands—Benediction, Mistress, and Dethroned. Three truths emerging from Endarkenment: The world is fucked. Humanity is fucked. Anaal Nathrakh remains heavy as fuck. ~ Kevin Stewart-Panko