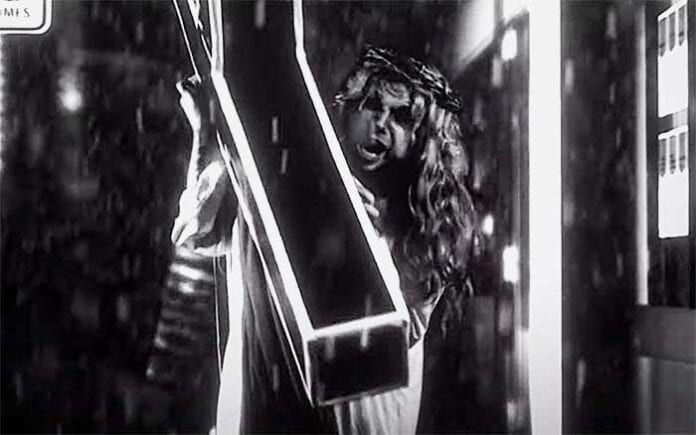 GHØSTKID’s music is a headlong dive into darkness and aggression. It aligns on new paradigms: baring its teeth while keeping a sense for catchy melodies.

GHØSTKID is the new namesake of Sebastian “Sushi” Biesler (formerly Eskimo Callboy) and a conspiracy of friends and like-minded allies who have come to a riot of their own: Drummer Steve Joakim from Sweden, as well as guitarist Danny Güldener and bassist Stanislaw Czywil, both of whom were previously in To The Rats and Wolves.

Today marks a very special release — in fact, it is two releases of the song “THIS IS NØT HØLLYWØØD,” telling a universal story from two perspectives.

The video for “THIS IS NØT HØLLYWØØD,” featuring Timi Hendrix from Trailerpark, premieres at 12pm ET/9am PT. Hendrix not only appears in the video, but he also did the original front cover painting of the single art.

The video for “THIS IS NØT HØLLYWØØD,” featuring Johnny 3 Tears from Hollywood Undead, premieres at 12:15pm ET/9:15am PT.

Both versions of “THIS IS NØT HØLLYWØØD” are taken from GHØSTKID’s self-titled debut album, which was co-produced by Phil Sunday and produced by renowned producer Sky van Hoff (Rammstein, Emigrate). The album drops via Century Media on November 13. Pre-order it here.

‘THIS IS NØT HØLLYWØØD’ is an unmasking that shows the ugly side of show business. To be an artist, sometimes means to deal with a lot of problems. You have it all but maybe you’ll have nothing in the end.

In the video of the song, I’ve tried to symbolize this dilemma to the point.

Some say Jesus was the first pop star and you can compare his story to many others. The story has no happy ending.

People only see you as some kind of god. They glorify you even when they don’t know you in person. In the beginning, you’re the idol and one day there comes the downfall and you end up on a cross!

Who can you trust if everybody just wants to see you as a perfect product?

Who will you ask for help if everybody just loves the artist and not the person behind the mask?

Who will take all your pain and pressure away if you always have to function?

As an artist nobody wants to see your weakness; they just want to be entertained! You need a strong mind to shape a world that constantly tries to shape you. Otherwise, you will lose the most important thing…you will lose yourself!”

EVI VINE to Tour with Wayne Hussey in Support of Black...