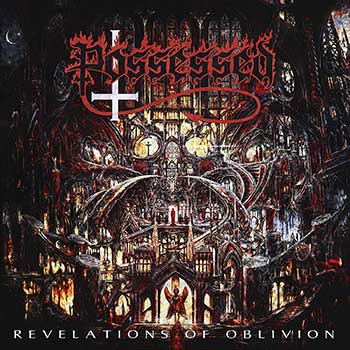 DEATH METAL: Barring a couple of early 90s demos and a song here and there, there hasn’t been much new material come from Possessed since The Eyes of Horror EP in 1987, and even that wasn’t a complete band effort. As vocalist Jeff Becerra has worked to revitalize the band that first coined the term death metal, he has focused on the outfit’s legacy—The Eyes of Horror and the first two albums. Writing new songs hasn’t been a priority given Becerra is the lone original member, has been confined to a wheelchair since a 1989 shooting, been focused on obtaining his degree and subsequent career, and using Sadistic Intent as his backup band to recreate the classics on the festival circuit.

Now, with a full band with dedication and experience in tow (featuring current and ex-members of Gruesome, Agent Steel, Coffin Texts, Diabolic, Dragonlord, Maruta, and more), Becerra is able to unfurl a new era for the band. In addition to the title (doesn’t Revelations of Oblivion scream 80s death metal?), the skill and pedigree of the members has been harnessed and directed toward Possessed’s unique sound. The full throttle rickety collapse of the Seven Churches debut can be felt on “No More Room in Hell” and “Abandoned,” as lurching chromatic melodies are delivered with fluid, rapid-fire picking and enough quick shot rhythms to keep the song brimming with a herky-jerky feel. On the other hand, the more streamlined approach taken on Beyond the Gates and The Eyes of Horror is referenced on “Damned” and “Shadowcult,” where more restraint is on order, but the degree of thrashing and natural darkness provided by the tri-tone usage still makes it sound like the pits of hell are opening beneath your stereo.

The biggest sticking point of the album, ironically enough, is Becerra’s vocals. Not that his voice is lacking or that he turns in a subpar performance, it’s more the way his vocals have been recorded and mixed. There’s an unnerving clarity to his enunciation and his placement high in the mix makes it such that a lyric sheet isn’t necessary. But, at times, the cleanliness and lack of integration creates a fractured feel, almost like he’s being showcased. Theoretically, this is understandable, but in practice, the lack of synthesis ends up hurting the album when Becerra’s phrasing jumps into higher registers or when he holds a scream, as the power ends up being muted and borders on the realms of home recording. The good sign is that Possessed has done an effective job of referencing those glory years, but updating it with enough forward thought and thrust so that it’s not a simple copying of past laurels. There are killer riffs, solos, and songs that are wrapped up in Possessed hallmarks like paeans to the satanic underworld, horror movie salutation (“Omen”), and gloriously excessive tom and roto-tom fills. ~ Kevin Stewart-Panko