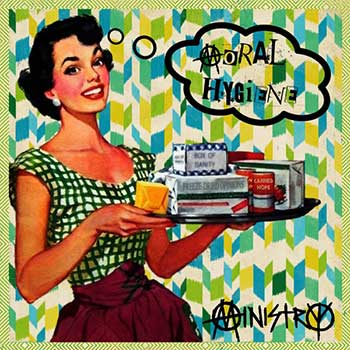 INDUSTRIAL METAL: Timelessness in songs and song lyrics is much more difficult to achieve that it appears. Think of all the protest songs from the 60s and 70s that specifically put the Vietnam War in their crosshairs. How about all those mopey emo bands from the 90s and early 00s whose frontmen took it upon themselves to sing about personalized instances of unrequited love? Few to none of those aged nearly as well as those songs that were better able to generalize their anti-war and broken heart sentiments.

Heck, even Ministry has fallen into this difficult trap by littering their 1992 album, Psalm 69, with Gulf War I and George H.W. Bush references, but those happened to be the pressing issues of day and likely made finding and using sampling material much easier. It’s tough to say and tougher to balance present-day relevance with how stuff is going to age going forward when an album/song is supposed to be a snapshot of a moment in time.

Given Al Jourgensen’s long and storied history, it’d be a surprise if he didn’t address today’s hot button topics—climate change, COVID-19, uprisings against racism, media disinformation, and Trump-ism—and make use of sampled material from Greta Thunberg, demonstrations in support of the late John Lewis, pandemic talking head doomsayers, and the Mango Mussolini himself. In some strange way, the hope is that these topics and the supporting sampled material do become dated relics of the past. That would mean that the environment righted itself, our society elevated to one that is truly fair, equitable, honest, and learned, and Trump’s unhealthy lifestyle (or the Justice Department) finally caught up with him and he’s rotting in a box or prison cell somewhere. But thems ain’t safe bets. We’ll be talking about this sort of shit for years, whether in our homes, around barrel fires, or between beatings at Gilead style re-education camps.

This potential for this whole being dated thing is the only real umbrage there is to have with Moral Hygiene, Ministry’s 15th album. One could scoff at their cover of “Search and Destroy,” but that would depend on whether or not you’re sick of hearing yet another rendition of a song the world doesn’t need another a rendition of, despite the twist Ministry puts on the track. Moral Hygiene unleashes the classic martial approach of Jourgensen and his charges—one that deftly inserts heart, soul, and warmth into mechanized rhythms and peppers it with walls of guitar playing, walls of stacked chords, and shuffling notes that fall in the purgatory between industrialized avant-garde and thrash metal.

“Sabotage Is Sex” marries early Young Gods and Slayer’s “Mandatory Suicide” with Jello Biafra’s nasally guest spot ensuring a Dead Kennedys comparison. “Alert Level” and “Good Trouble” are both instantly recognizable for their loping guitar bends and Jourgensen’s distorted bellow, not to mention the integration of harmonica into the latter. “Believe Me” possesses that same singularity with a massive chorus played off a bunch of sampled Trump blather. Other highlights include sinister near ambient doom cautionary tales (“We Shall Resist,” “Death Toll”) and the stealthy, sample based crawl of “Disinformation” hearkening back to The Mind Is a Terrible Thing to Taste days mixed with a factory floor throb and ripping wah-wah leads.

Despite Jourgensen going on record saying he feels more hopeful about society now than ever before, it’s hard not to hold an opposing view that our world as we know it is hanging on by a thread and, as per usual, Uncle Al has penned a collection of scathing but entertaining rebukes. ~ Kevin Stewart-Panko