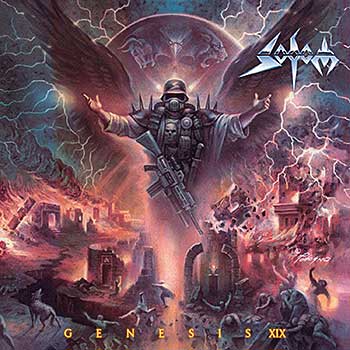 THRASH METAL: Sodom has consistently released badass albums ever since the 80s, and they are definitely one of the most legendary thrash bands, being one of the German Big Four (Sodom, Kreator, Destruction, and Tankard). Releasing their newest album, Genesis XIX, after a long absence, guitarist Frank Blackfire is back in the band and Sodom also welcomes a new drummer, Toni Merkel. Genesis XIX is one of the band’s stronger recent releases. It’s not as powerful as their older material, but Sodom fans will definitely dig this album.

Genesis XIX starts with the intro “Blind Superstition” that leads into “Sodom & Gomorrah.” The band released this song as one of its singles because it’s a model Sodom song—fast, heavy, and gets to the point. Almost 40 years after its formation, Sodom hasn’t slowed down a bit, and new drummer Toni Merkel has some serious chops. The drumming is rapid and heavy, keeping up with the fast guitars, and the song maintains the same swift speed throughout the entire track—a great song to perform live.

The title track stands out as a favorite of the album. “Genesis XIX” has a very long intro—feedback for almost a minute before the guitars come in. There are some catchy riffs until the drums start, and then heavier riffs join the drums, turning this track into a whole new monster. This style carries on until a melodic part catches you off guard towards the middle of the song. A solo then comes out of nowhere, and it’s more complex than what we usually hear from Sodom and has a completely different tone. With Frank Blackfire back in the band, the guitars clearly went up a few notches compared to the last few Sodom albums.

The next song is “Nicht mehr mein Land,” which translates as “Not My Country Anymore.” It’s one of the more aggressive songs on the album, filled with heavy riffs and drumming. Vocalist and bassist Tom Angelripper also uses varying vocal styles—his signature yelling style throughout the majority of the song but also high-pitched death metal growls in some parts.

Things get a little weaker with the next song, “Glock ‘n’ Roll.” It’s fast and features some great guitar parts, but it feels forced, sounding like the band wanted the song to be faster and more aggressive. Angelripper’s vocals aren’t as fierce as they usually are, and this song feels bland compared to the rest of the album. The song does pick up toward the end with a badass solo and blast beat drumming complementing the soloing, making this part exceptional.

“The Harpooneer” is next and has a unique intro—it’s extremely slow, with some doom inspired riffing, not like the traditional Sodom we’re used to hearing, which is a good thing. The riffing suddenly speeds up, catching the listener off-guard, and the song follows the same rapidity until we get to the slower chorus. The song speeds up again with headbanging riffs and blast beating drums, and Blackfire busts out another insane solo towards the end of the song.

“Indoctrination” is a very punk meets Motörhead meets thrash song, starting with a bass intro and unleashing some catchy riffing. Sodom released “Indoctrination” as a single, and this song brings fans back to the older Sodom material mixed in with punk influences. And Blackfire’s solo at the end is the icing on the cake.

The last song on the album is “Friendly Fire,” closing on a great note with a powerful track. It’s one of the speediest songs on Genesis XIX, with swift soloing, the fastest blast beats the album has to offer, and another killer solo towards the end.

Overall, Sodom delivers an annihilating album with Genesis XIX. While it’s not the best album of the band’s career, Sodom fans will certainly be pleased with Genesis XIX. So, make sure to blast this album and head bang. ~ Stephanie Jensen