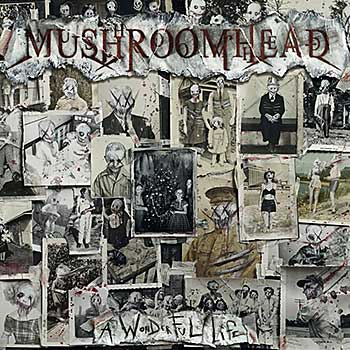 INDUSTRIAL ALT-METAL: An unofficial feud between Des Moines’ Slipknot and Cleveland’s Mushroomhead has existed for years. Although there are some musical similarities, uninformed music fans insist that Mushroomhead is a mere clone of Slipknot. However, the masked horror metal octet actually formed in 1993, three years before the Iowans, but has never achieved the commercial success that Slipknot has endured.

On its eighth full-length album, A Wonderful Life released by Napalm Records—its first since 2014’s The Righteous & the Butterfly—Mushroomhead has crafted a dark, macabre masterpiece full of horrific atmospheres, massive dynamics, and terrifying melodies with a little less of its Faith No More-isms this time around. On A Wonderful Life, the band experimented a bit more musically and lyrically without alienating the fan base that they’ve previously created.

Mushroomhead has gone through numerous lineup changes throughout its existence, especially with singers, with drummer Steve “Skinny” Felton being the only original member. A Wonderful Life is the band’s first album to feature new guitarist Tom Shaffner, along with vocalists Steve Rauckhorst and Jackie LaPonza. The male/female vocal duets between the duo—most notably on “Pulse” and the politically charged “The Heresy” and “Carry On”—introduce massive harmonies and wonderful textures that the band only hinted at on previous albums. In addition, the trade-off vocals between Rauckhorst’s melodic cleans and returning longtime vocalist Jason “J Mann” Popson’s harsh/rapped vocals on certain tracks add a cool dynamic as well.

Opening track “A Requiem for Tomorrow,” beginning with an ominous Latin choral passage (performed by the Cleveland Chamber Choir)—which pops up on several occasions throughout the album—is juxtaposed with heavy industrial inspired grooves with melodic synths. The galloping “Madness Within” is a fist-pumping scorcher, while the chant-able, arena ready anthems such as “Seen It All” and “I am the One” will certainly go over well in the live setting. Produced by Felton (who’s manned the controls for every Mushroomhead album) and Matt Wallace (Faith No More, The Replacements), the sound on A Wonderful Life is clear, crisp, and massive, especially on the choir segments, layered vocals, and guitar tone.

However, at 13 tracks and a whopping 68 plus minute runtime, including four bonus tracks, it’s a lot to endure in one sitting, especially when closing track “Confutatis” is four plus minutes of nothing but choir. Also, please keep in mind that this album is a grower, like creeper weed. It takes a few listens to fully invest in what the band is presenting, as different nuances and dynamics are heard with each subsequent listen.

This is a brand new chapter of Mushroomhead. It’s nothing like what it used to be and it’s nothing like what you’d expect it to be. If you’re already a fan of Mushroomhead and you’ve greatly missed new material for the past six years, then you’ll delightfully devour what’s on offer here. However, if you haven’t been impressed with the band’s last couple of albums, then A Wonderful Life won’t change your mind. Although, it’s worth giving it a fair shot. ~ Kelley Simms

WEREWOLVES: What a Time to Be Alive