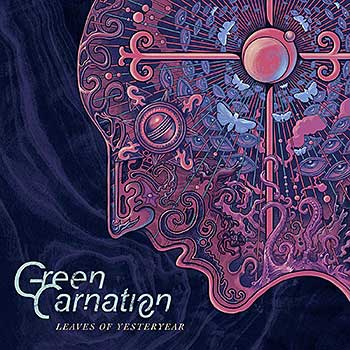 WORTH THE WAIT AND WORTH ITS WEIGHT: If you were one of the few and proud who managed to attend the disastrous American tour that essentially broke up Norway’s Green Carnation, then consider yourself lucky. After all, it’s not every day that a band as unique and dynamic as this gets to grace us with their presence, even if that presence just so happens to be in front of about 20 people.

This was unfortunately the case with many of the shows on that tour, but we’re obviously here to talk about a new album, so the story does have a happy ending. Or maybe “ending” isn’t quite the right word to describe Leaves of Yesteryear. Maybe “rebirth” makes a bit more sense, as it’s been over 15 long years since Green Carnation last graced their fans with a new collection of songs.

Leaves of Yesteryear picks up largely where The Quiet Offspring [2005] and A Blessing in Disguise [2003] left off, bringing together much of the same emotional moves and progressive arrangements that resonated so strongly with fans. “Sentinels” is definitely the most immediate track here, a five minute anthem with soaring melodic vocals courtesy of Kjetil Nordhus that would feel right at home on A Blessing in Disguise. It’s also the shortest, as the album hangs its hat more on long-form songwriting than ever before, with three other epic tracks and a Black Sabbath cover of “Solitude” to round things out.

Don’t think for a second that this Sabbath cover is some throwaway, however, as Green Carnation really hammers home the desperation of the original while adding their own personal stamp. In fact, the band’s trademark melancholy is all over this thing, working wonders on the album’s centerpiece, “My Dark Reflections of Life and Death.” It’s a song that might bring back fond memories of the band’s early material, specifically the 60 minute epic that was Light of Day, Day of Darkness [2001]. There’s a sense of urgency and heaviness, with driving drums, a thick guitar sound, and minor key riffs that melt into moody synth passages and powerful vocals. The song even says as much within the lyrics, referencing that album’s title in a way that makes this song feel like a reflective part of the band’s past.

Finally, “Hounds” is something of a crossroads in between these two extremes, an excellent amalgamation of everything that makes Green Carnation so damn brilliant. It perhaps best describes the sound of Green Carnation now, an exciting look forward into a new era for a band who left us too soon, but thankfully have returned to give us more of that inimitable metal magic. ~ George Pacheco