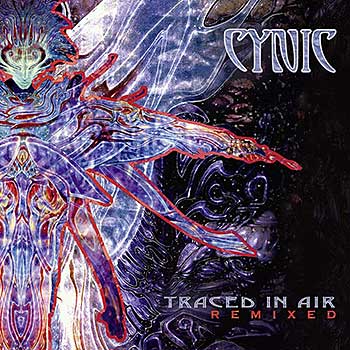 REMIXED AND REMASTERED: If there is one metal band that progressed the most throughout their career, it’s Cynic. They emerged in the early 90s during the midst of extreme Florida metal with the album Focus. This album brought jazz fusion elements into the aggressiveness of death metal. But as Cynic’s legacy prevailed, they started ditching the metal influences and focusing on the jazz and progressive elements of their music. This movement started with their sophomore album, Traced in Air.

Cynic continues to reinvent their sound by traveling back in time and shifting some of the qualities of previous albums, and on September 27, Cynic fans will be able to hear their sophomore album Traced in Air completely remixed and remastered. If you listened to the album teaser, fans can hear two main differences: 1. Sean Malone’s bass re-tracking, which sounds incredible, and 2. The harsh vocals—performed by former Cynic guitarist/vocalist Tymon Kruidenier—are completely removed.

Let’s focus on the positives first. The album was remixed by Periphery’s Adam “Nolly” Getgood and remastered by Ermin Hamidovicadn, and the sound has so much more clarity. Everything sounds louder and clearer—from the drums to the riffs, highlighting every accent and note. Such a unique and influential album like Traced in Air deserves proper production and fans will definitely notice a difference.

As one of the most influential bassists of all time, Sean Malone is a virtuoso figure deserves to have his bass ring in loud and clear. However, his bass got lost in the mix with the original recordings, but for this remix, Malone re-tracked his bass. The bass is now more prominent throughout the album, and you can hear his bass weaving in with the soloing on “The Space for This,” the bass is heavier on “The Unknown Guest,” and any Cynic fan will melt when they hear the tasty bass on “Adam’s Murmur.” Another reason why Malone’s re-tracked bass sounds phenomenal is it’s natural. When bass gets re-tracked on albums like this, it tends to sound too loud and dominant. Malone’s bass is prominent where it needs to be and blends in with the rest of the elements when it’s necessary. His overall bass tone is beautiful and an improvement from the original recording. The result is very organic, and we truly hear Malone’s strength on this remix.

Now, let’s get to the bad. And there’s only one real flaw—erasing the harsh vocals. Kruidenier’s vocals brought something extra to Traced in Air, and while his harsh vocals weren’t as dominating as Paul Masvidal’s cleans, they had that edge that Traced in Air needed.

Cynic is now diverting away from the harsh aspects of metal, and, honestly, that’s fine. Cynic was never a blastbeat and windmilling band to begin with. Their music is inventive and impressive, and they deserve to expand to other genres and implement other styles, even if that means doing away with harsh vocals and other metal aspects of their music. In other words, taking out the harsh vocals isn’t what’s bad, even though Kruidenier’s growls were ace. What’s bad is how they didn’t add anything in its place. Where there was once a growl, there is now…nothing. It’s blank.

Take “Evolutionary Sleeper” for example. The introductory vocal line—that beautifully drawn out, “Evolutionnnnn!”—is now gone. And there’s nothing to replace it. That one little vocal line did so much for the song—the slight guitar chords opened up the song, and suddenly Kruidenier’s vocals exploded with the entourage of other instruments. This new version doesn’t convey that type of power. The other areas where Cynic fans will notice the difference is the lack of cleans and growls harmonizing. While there’s nothing wrong with hearing more of Masvidal’s beautiful clean singing, the extra growls gave these parts so much more oomph. Fans will also notice this in songs such as “Integral Birth,” specifically in the chorus. Where Masvidal harmonized with Kruidenier, Masvidal’s high vocal range with the harsh vocals added a unique contrast that was illimitable. It was one of the many qualities that made Traced in Air magical. However, there are some exceptions to this “no growls are bad” argument. Giving the same harmonizing example, the deeper vocal parts were kept in, so it does sound more like the original. You can hear this effect in songs such as “Nunc Stans.”

What would have been better? If Cynic wants to abandon the harsh vocals, they could have added different vocal lines or harmonizing. Masvidal is a very talented singer with an impressive range. We could have heard the vocal lines completely reinvented, adding more qualities to this remix rather than just emptiness where the growls used to be.

Cynic warrants insurmountable respect for always evolving and pushing the barriers in metal and redefining and questioning what metal is. However, they should focus their new musical direction toward new material and not reinventing old material. While the production and bass upgrade are nice, Traced in Air held a magical element that can’t be remixed or remastered. Every Cynic fan is different. That’s why all Cynic fans should give the remix a chance. But you’ll likely re-listen to the original and will find a new appreciation for it. And one more thing, please don’t remove the harsh vocals from Focus. ~ Stephanie Jensen