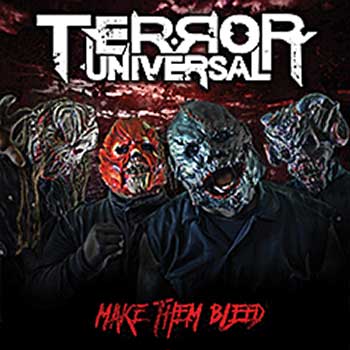 UNIVERSAL MONSTERS: On the surface, Terror Universal may look interchangeable from any number of masked metal acts, from Slipknot and Mushroomhead to GWAR and Lordi, and the irony that a genre once known as shock rock is now anything but should not be lost. Luckily, however, boasting a lineup that allegedly contains members of Machine Head, Ill Niño, and Soulfly, the pedigree is here for the band’s full-length debut, Make Them Bleed, to be nothing short of a magnificent, brutal offering. “Passage of Pain” and “Welcome to Hell” set the tone for the album, with punishing vocals from frontman Plague set against phenomenal riffing from Thrax, but it’s what comes later that makes it worthwhile. Past the lightning fast fretwork and infectious choruses of the title track, much more cinematic territory lies, in perfect keeping with the slasher flick aesthetic that surrounds Terror Universal. The eerie synth of “Dig You a Hole” and “Into Darkness” makes for tremendous mood music, as they sandwich the droning and endlessly ominous “Dead on Arrival” (featuring Fear Factory’s Tony Campos). Between masks and nicknames, listeners have been burned before on useless gimmicks, but on Make Them Bleed, Terror Universal proves that they’ve got the chops to back it up. ~ Tyler Davidson