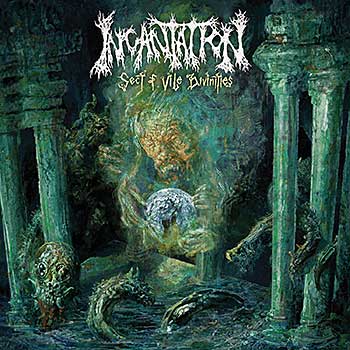 FILTHY BLUDGEONING DEATH METAL: No one does death metal quite like Incantation does. For over three decades, Incantation has been one of the most consistent and influential underground bands in the genre.

Sect of Vile Divinities possesses some of the band’s early era influences, consisting of various catchy and dark, melodic harmonies with more mid-tempo rhythmic patterns. The songs also contain simple structures possessing a raw yet organic and primitive tone. What sets Incantation apart from their death metal peers is the band’s own style of riffing—untraditional but catchy and mesmerizing nonetheless. The band also introduces more arpeggiated guitar solos this time around.

There’s a great mix of up-tempo tracks (“Fury’s Manifesto,” “Chant of Formless Dread”) with slow burning, dirge-like tracks (“Propitiation,” “Ignis Fatuus”). Lead-off track, “Ritual Impurity (Seven of the Sky Is One),” is one of the fastest tracks on the album, while various tempo changes and transitions keep other songs fluid and flowing, most notably on “Entrails of the Hag Queen” and “Black Fathom’s Fire.” The longest track on the album, “Unborn Ambrosia” at six plus minutes, is also the most dynamic and impacting out of all the tracks, while “Siege Hive” concludes the album with a frantic barrage of rhythms and a wonderfully chaotic ending.

If you’re seeking consistent, brutal, and precise death metal, you just can’t go wrong with another Incantation release. This type of death metal—especially with McEntee’s harsh, guttural vocals—may not be everyone’s cup of tea, but give credit where credit is due. By sticking to their guns, Incantation proves why it’s still around after 30 plus years for a reason. ~ Kelley Simms