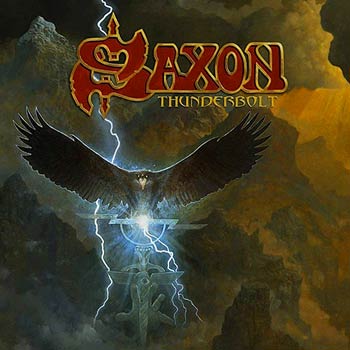 HEAVY METAL THUNDER: Finding a band that sounds this vibrant and authentic on its 22nd album is no easy task, but Saxon has long proven its status as a legend with a work ethic matched by no one. Balancing classic, melodic metal with contemporary heaviness, Thunderbolt finds its main strength in the diversity and quality of the songs. “They Played Rock and Roll” is a fittingly raucous tribute to Motörhead, while “Speed Merchants” comes the closest to sounding like the early years. Lyrically, Saxon has always been about telling stories, and that is clearly in evidence throughout, especially on the songs “Nosferatu (The Vampires Waltz)” and “Sons of Odin.” Vocalist Biff Byford is still a powerhouse at age 67, belting out the songs with the same range and authority. The rest of the band is as solid as ever, too, with the underrated guitarists Paul Quinn and Doug Scarratt delivering some incredible dueling leads. The one experimental element on Thunderbolt is the inclusion of death growls on the song “Predator,” courtesy of Amon Amarth’s Johan Hegg. This duet is rather jarring, and the two vocal styles don’t mesh that well, but it is good to see Saxon still actively trying new ideas. Saxon’s creative renaissance began with 2011’s A Call to Arms, and with Thunderbolt shows no signs of slowing down. ~ Daniel Hinds