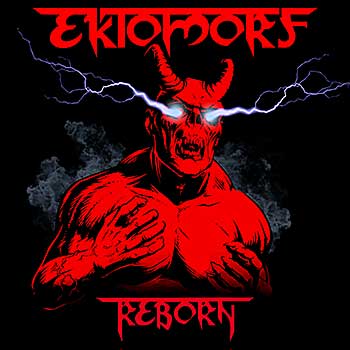 THRASH METAL XEROX MACHINE: All genres of music are active participants in the pursuit of paying homage and salutation to that which came before them. However, there’s hardly a genre that takes as much pride in looking backwards as some purveyors of heavy metal. And that’s not necessarily a bad thing because everything comes from somewhere and if it weren’t pimply faced teenagers reconstituting the hard rock, NWOBHM, hardcore punk, and progressive rock sections of their record collections, the world would have never had thrash metal bestowed upon it and we’d all have led remarkably emptier existences. The trouble is when bands of the present do little more than ape their inspirations, effectively existing as carbon copies of their influences.

Since forming in 1993, Hungary’s Ektomorf—led by main man/lone founding member/guitarist/vocalist Zoli Farkas—has made a career of being metal’s version of the office copy machine. Specifically, Ektomorf’s time on planet metal has been as a poor person’s duplication/pale comparison/mirror image of Soulfly and Sepultura, but mostly Soulfly. Props have to be given to Farkas for weathering the variety of storms he has survived over the years—the countless lineup shuffles and hailing from Mezőkovácsháza, which is hardly where the music industry has ever placed its focus—but Reborn continues to demonstrate Ektomorf’s inability for original musical thought, even after 27 years and 15 albums. They may have shifted away from the consistent and constant blatant picking of Max Cavalera’s pocket (including their inauthentic use and abuse of Brazilian instrumentation and rhythms that came straight outta Hungary), but it remains ridiculously easy to play “spot the influence” with this band. Primarily, because they far too often fall on the wrong side of the line separating “being influenced by” and “directly ripping off.”

The album starts off on a not too shabby note with “Ebullition,” a track that adds an incisive modern edge to the epic thrash of Soulfly’s last album, Ritual, which coincidentally is the most definitive statement by Max and Co. in years. As the album trundles along, Reborn finds itself cherry picking from the fury of Beneath the Remains on the title track and “Fear Me,” Chaos A.D.’s punky flavor in “When the Hate Conceives,” and more of Soulfly’s rhythmic bounce in “The Worst Is Yet to Come.” And all along, Farkas perpetually proves that he’d be the first and last consideration for replacement should Max ever develop laryngitis or vocal chord polyps.

Where Ektomorf has shifted with Reborn is in the direct mining of classic Metallica and that band’s classic instrumentals. The title track’s unnecessary midsection is less a nod to the middle of “To Live Is to Die” than it is a head-on car crash with an uncanny similarity between the legato guitars. The midsection in “Fear Me” might as well be “…And Justice for All” minus the oddball time signature, and if you shifted a few notes around and subtracted a few more in the acoustic intro to “When the Hate Conceives,” you’d have “Battery.” However, Reborn’s most egregious grift comes during the instrumental “Forsaken,” which manages to blatantly rip huge sections of both “The Call of Ktulu” and “Orion” during its runtime, including many of the sustained melodies, and at one point lead guitarist Szebasztián Simon is heard directly chiseling Kirk Hammett’s solo phrasing from the latter at the 2:14 point and again at 3:30.

Granted, Simon is playing over a riff that is about as close to the same riff Hammett was soloing over back in 1986, so whaddya going to do? And this, in a roundabout way, is partially the point—creating something standalone original and from out of thin air unique is virtually impossible. And if you’re a metal band that’s going to obviously borrow a few stripes from somewhere, at least Ektomorf got it right by diving unashamedly headfirst into three of the greatest albums in the history of forever.

Your tolerance and enjoyment of Reborn will likely hinge on your thoughts on the matter of being influenced by versus being far too influenced by. Undeniably, the album is well played, well produced and sounds great. So, if you don’t give a toss about the occasional recycling (in this case, more than occasional) of recognizable riffs and themes, then dive right in. If that sort of shit really grinds your gears and you take serious issue with bands abusing creative license, go listen to Metallica, Sepultura, and Soulfly to get your kicks and forget this band ever existed. ~ Kevin Stewart-Panko

Album opener “Ebullition” immediately crushes with its thrashing riffs, energetic D-beat and mid-paced rhythmic delivery. Zoltán’s aggressive, harsh barked Max Cavalera-esque vocals have never sounded as vicious as they do throughout Reborn. Although the Soulfly/Sepultura comparisons will always follow Ektomorf—most notably recognizable on the memorable first single and title track—the band has toned down the similarities in recent years.

Second single, “And The Dead Will Walk,” contains a menacing Metallica-esque slow chugging guitar riff, a dark and evil vibe, and a highly memorable chorus, proving to be one of the heaviest and catchiest tracks on the entire record. Part of this track’s charm is Zoltán’s European accent and pronunciation of “walk.” The remainder of the tracks, including the punky/groove-laden rhythmic thrust of “Fear Me” and the thrashy, mosh pit inducing frenzy of “Where the Hate Conceives,” are equally impressive. Album closer “Smashing the Past” ends the record in fine fashion with a flurry of fast thrashing, downtuned riffs, decorated with a punky/hardcore vibe and a relentless rhythmic pace.

Ektomorf has been proving itself for two-plus decades while never compromising the band’s vision and aesthetic. However, outside of its die-hard fan base, Ektomorf has never gotten the respect they deserve. If Reborn doesn’t change the minds of hardened metalheads about the band, then nothing will. ~ Kelley Simms