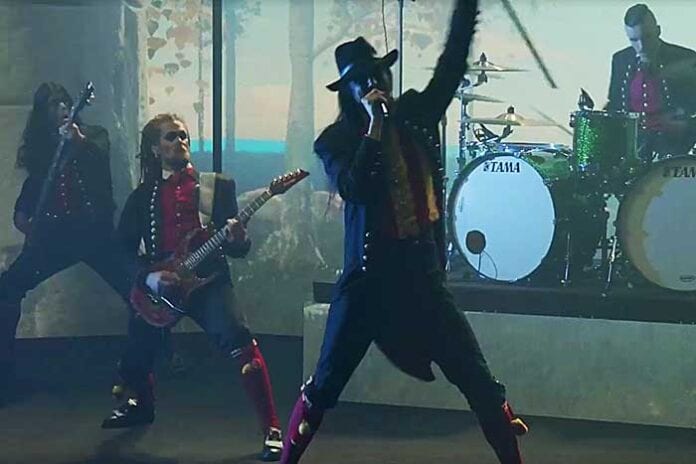 There has been a serious progression of live streams for artists since the touring industry came to a screeching halt last March. While the early days consisted of some band accounts going live on Instagram, it quickly progressed to some in-person drive-in shows and full band performances in empty venues. Be it Warped tour veterans The Maine playing in an empty room in Arizona to Black Veil Brides playing the iconic Whiskey A Go-Go, a band has just set a new bar for the live stream show experience. That band is Gothenburg, Sweden’s Avatar. Not only did the band do a live stream, but they’re doing four. With the second going down last Saturday night, it was a must-see.

Not only did Avatar put together a theatrical presentation for the just over 90 minute set, but they also took on the challenge of playing a fan voted set list for the majority of the performances. Saturday night’s theme was Age of Illusions, while last week it was Age of Dreams. The latter featuring their latest album Hunter Gatherer from start to finish as well as some of their biggest tracks. For the bill Saturday night, the experience focused on fan voted favorites from two of their records, Feathers of Flesh and Avatar Country, and created a curated performance around the requested tracks that took the art of the live stream to a whole other level.

Taking place in what appeared to be a black box theater, the show opened up with frontman Johannes Eckerström sitting at the piano to perform a gorgeous rendition of “The Eagle Has Landed.” His range gleamed through in these quiet and elegant moments at the piano before moving on and joining the rest of this band that were waiting in position as the camera shifted to show. For the first 30 or so minutes, it was straight tunes and planned but fantastic transitions throughout the space. Be it the drummer testing out three different drum sets before he settled on the right one to a set up lined with pink doors the band would pop out of, the experience was a special treat for fans of the band.

The performance started to ramp up after Eckerstrӧm first addressed the “crowd” around 30 minutes in with, “It’s so good to see all of you. It’s good to see you and share this with you. We’ve been sharing a few things as of late, lately. Most of all maybe, we’ve shared darkness. We’d like to bring some light to this.” Which is when they destroyed it with “Black Waters.” It was this huge gritty rock ‘n’ roll moment that was unexpected but made for an incredible moment in the performance.

With the first half of the set dedicated to Feathers of Flesh, a brief intermission began around the hour mark as viewers were transformed to the Avatar Country part of the set. It was kicked off with Eckerstrӧm back at the piano to perform “The Avatar Country National Anthem, The Lounge Version.” At this point, we were then introduced to the King otherwise known as guitarist Jonas Jarlsby, as well as a whole new energy not seen yet to the fullest degree. From “The King Welcomes You to Avatar Country” to “The King Wants You” and “King After King,” it was a non-stop blur of classic rock ‘n’ roll and a great conclusion to a fiery, well thought out, theatrical performance that is sure to leave you wanting more.

And thankfully, Avatar is giving you that. With two more live streams coming up, Age of Madness this Saturday, January 23th at 1 pm PST/4 pm EST/10 pm CET respectively and Age of Memories next Saturday, January 30th, at the same times, tickets can still be purchased at AvatarAges.com. While you’re there, you can also scoop up a virtual meet and greet with the band. Don’t miss out!