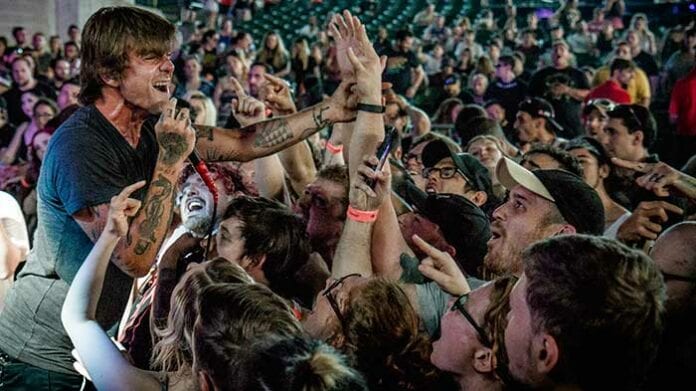 Summer is the time music fans look forward to the most—it’s finally festival season! In the past years, there were endless amounts of shows to choose from. However, with the ending of Rockstar’s Mayhem Fest and the Vans Warped Tour coming to a close for its 25th anniversary, many were at a loss. In comes Rockstar’s Disrupt Festival to save the day. The festival mimicked the setup of past summer tours, including a festival stage and multiple vendors for fans to enjoy.

What makes this festival stand out from the rest is that there are no conflicting set times, which prevents fans from missing any of their favorite bands. This created a significantly more relaxed environment for concertgoers so that they could truly immerse themselves in the event. Despite the free-for-all that was Warped Tour, the Disrupt Festival had fans separated by section, from pit to lawn, during the main stage acts. This seemed to trouble many, as they were hoping for more interaction with the bands during their live performances, and many bands had to play to scarce audiences. Overall, each band made the best of the day and played with full energy, which brought true joy to their audiences.

The day began with June Divided, a band not typically on the festival lineup. This four piece indie rock ensemble included a strong female lead, Melissa Menago, who was not only the vocalist but keyboardist and guitarist as well. This woman of many talents brought a considerable amount of energy to the opening crowd. Fans walking into the festival bobbed their heads and prepared themselves for a day of excitement.

Following June Divided was none other than Hyro the Hero. This is a do not miss band on the tour. The lead, Hyro, flew around the stage singing about strength and ambition in a gangsta rock style, an alternative to many bands in the scene. The intensity of this performance is indescribable. Members of the band ran around the stage creating their own mosh pit. Hyro even hopped into the pit of fans and brought life to the crowd. The spontaneity of each member is what had fans falling in love with the music and the band.

The profound energy turned over to a feeling of female strength and power as Juliet Simms, previously of Automatic Loveletter, took the stage. Her beauty and confidence radiated through the crowd as fans swayed to the blues soul rock. This strong female lead played both the tambourine and guitar throughout different songs in her performance. Juliet made the stage her runway as she strut with fearlessness while singing with a tenacious yet melodic voice that left fans wanting more.

Trophy Eyes took the stage after Juliet Simms. Dedicated fans immediately hopped on their feet and did not stop moving or singing through their entire performance. The band, however, did not quite share this energy. Each member remained still and had a solemn, almost miserable look on their faces. The lead singer, John Floreani, remained behind the microphone, which took away the spirit behind the music. The talent and popular music of this band was lost behind their performance. Nonetheless, this did not stop fans from singing every word of their favorite songs, such as “You Can Count on Me.”

As the liveliness of the day began to die down, fan favorite Memphis May Fire took the stage and brought the spirit back to the festival. Once Matty Mullins announced they would be playing songs off their 2012 album Challenger, the crowd went wild and the pit finally broke out. Fans were clearly nostalgic hearing songs from their younger days and went harder than ever. Every person in the crowd was on their feet and singing their hearts out with the band. The festival came alive once again.

Immediately following came Sleeping with Sirens. The second Kellin Quinn stepped on stage, fans jumped on their feet and seemed to never come down. The band played new songs and old, and the crowd seemed to know every word by heart. They, of course, played “If I’m James Dean, You’re Audrey Hepburn” and people surfed to the front to sing with Kellin. This was yet another powerful performance from a band that never disappoints.

The main stage acts then began with Atreyu and out came the theatrics. There was lighting and smoke galore. The band took control of the full stage so that every member of the audience could enjoy the experience. Guitarist Dan Jacobs also played a set of neon green drums that riled up the crowd as he and Porter McKnight ran around the stage interacting with fans and making them part of their performance. There was not a single person sitting down during this set. The band even covered Bon Jovi’s “You Give Love a Bad Name,” which had every single member of the festival belting out the lyrics. The joy of the band and the fans was very apparent throughout the entire performance.

The Story So Far then took the stage, and fans were more than ready for this well known pop punk group. The lighting was soft and colorful to create a more relaxed environment to pair with the head bobbing music. Fans, however, were disappointed with the lack of interaction from lead Parker Cannon. He spent the entire performance behind the microphone, with his hands behind his back. Very few times did he walk up to the audience, only to immediately return to the mic. Though the song choices such as “All Wrong” made fans ecstatic, the lack of performance took away from what could have been a truly amazing set.

The time had finally come for Circa Survive. This was a very anticipated part of the night for fans and bands alike. This performance was one for the books. The heavy backlighting of purple and yellow set the mood as smoke leaked onto the stage. Lead Anthony Green immediately hopped onto the barricade and sang to and with each and every audience member he could reach. The absolute delight from Green and his fans was clearly evident. It was easy to see that performing is something the band is passionate about. Circa Survive is a group that everyone should have a chance to experience whether you are a fan of the genre or not. This band is a perfect example of showmanship and devotion.

It can be very difficult to follow the performance of Circa Survive. However, the band for the job is without question The Used. Celebrating their 20th anniversary of making music, they continue to put on a model live performance. The music began with a white screen displaying a cartoon visual of the development of their album cover from In Love and Death. The screen drops and the band immediately began playing as the crowd went wild. Narrow vertical screens that displayed visuals and lighting set to match their set list surrounded drummer Dan Whitesides. There was not a single fan without a smile on their face through the entire set. Bert McCracken made the stage his home. He had his cup of tea in hand, and even took the microphone stand and began doing squats while smiling at the audience. Midway into the set the same heart from In Love and Death was brought onto the stage hanging above the members and glowed through the venue. This band was made to perform and is another do not miss performance.

Closing out the night was iconic Thrice. The stage went dark with deep purple and red lights as they entered. The set was dark and deeply emotional, as if they were performing personally for each audience member. Quite a number of songs were played off of their new album Palms, including “Just Breathe.” As their set came to an end, fans slowly scattered their way out of the venue, and just like that, Disrupt Festival was over.

All in all for its first run, the Disrupt Festival had a solid lineup of performers that had audience members moving and singing their hearts out all day long. Though some minor adjustments could be made in the future, such as the exact lineup of bands throughout the day, the festival was a success to all of those in attendance. Once again, fans have their summer festival to look forward to.