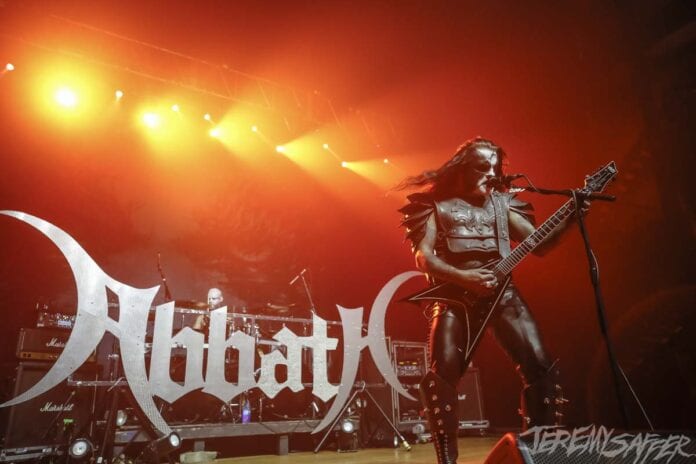 Legendary black metal icon Abbath brought his eponymously named band Abbath to the smallest state in the United States, and the show was anything but little. Well known for his tenure as the frontman of Immortal, when Abbath broke off to form his own band, the question on the minds of Immortal and Abbath fans alike was, “How will Abbath do on his own, and how will Immortal do with out Abbath?”

Comprised almost an entirely of a different lineup than when the band started in 2015, now in 2019 Abbath has yet again proven himself to be a force to be reckoned with both in studio and on stage. With a crowd full of corpse paint-laden fans, Abbath shuffled on stage (actually shuffled, as Abbath has no qualms about bringing some humor to his shows). The band opened up with one of the heaviest tracks from the first album, Count the Dead, as the crowd sang along to the choruses, giving the frosty frontman a warm welcome.

The new lineup with Ole Farstad on guitar, Ukri Suvilehto on drums, and Rusty Cornell on bass is a much tighter unit than the previous band from years before. The obvious missing piece was Mia Wallace, the newly appointed bassist in Abbath, but the band was incredible nonetheless, and Rusty, having toured with Abbath previously, played flawlessly. Abbath then went into three songs from the acclaimed new album Outstrider. Without taking anything away from the album, which is great, the songs sound even better live than they do on the record.

Abbath was clearly having fun with the crowd, with hilarious banter between every song. Abbath is not afraid to turn a serious genre on its ear by injecting a much needed sense of humor and fun into his shows. At one point, a member of the crowd jokingly yelled, “Shut up!” during Abbath’s banter, of which Abbath hung his head, stopped talking, motioned to zip his lips, and walked away sad while the entire crowd was laughing and the aforementioned heckler was loudly apologizing, “I didn’t mean it Abbath! Keep going!” So, Abbath went into the next song.

After the new songs, Abbath dug into the past with three back-to-back Immortal songs from Sons of Northern Darkness, of which the crowd loved both the Abbath and Immortal songs equally, which isn’t always the case when a member of a band with such a fan guarded legacy moves forward with something new. In the case of Abbath, his live show certainly proves that he has kept every ounce of that legacy and found a perfect band to complement him.

Following the grouping of Immortal songs, the band went into two more songs from Outstrider and finished up with two final songs from the self-titled Abbath record. Abbath ended the set by taking off his stage armor and holding it up like a wrestling belt to a crowd loudly cheering on the band and asking for more.

All in all, the show was fantastic. Abbath was clearly having an incredible time, as was the crowd, both feeding off each other’s excitement. It has to be somewhat difficult to share the stage with such a huge personality like Abbath, but the band members all held their own and not only looked awesome on stage but sounded perfect while doing so. The opportunity to see Abbath perform live is one of those things that should not be met with any hesitation or indecision. Do not miss it!

Abbath is currently on tour in the US with Obituary, and the album Outstrider is out now on Season of Mist.