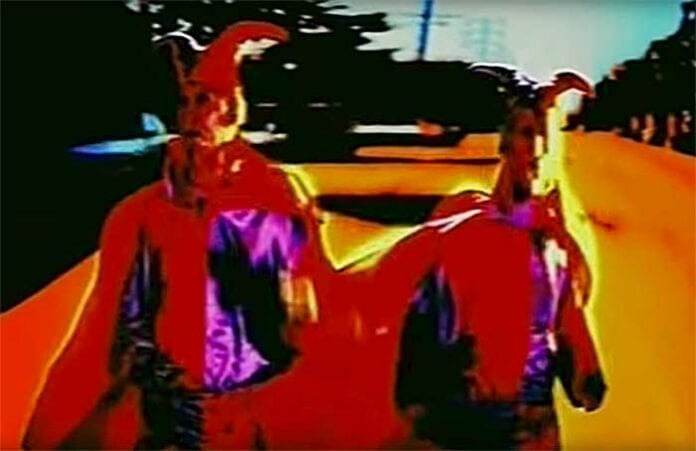 It’s that time of the year, metalheads! Pull out the pumpkins, fake blood, and scary masks. It’s Halloween! If you’re like most people, you’ll likely throw a killer Halloween party. And you need to choose the soundtrack wisely. But you’re not some normal person. As a metal and rock fan, your music interests are way better than everyone else’s. So you won’t settle playing traditional Halloween songs such as “Monster Mash” or “I Put a Spell On You.” But which songs should you play? While most metal and rock music conveys a spooky vibe, certain songs celebrate All Hallows Eve better than others. Here are the Halloween songs all metal and rock fans should play at a Halloween party!

THE BEST HALLOWEEN SONGS TO PLAY
Every rock and metal fan has different band and music preferences. All of these songs have serious spooky vibes and make a killer soundtrack for a Halloween party!

THE MISFITS – “HALLOWEEN”
With their fifth single, The Misfits reminds us that “this day, anything goes.” Whether you celebrate your Halloween with “candy apples and razor blades” or “burning bodies hang from poles,” this famous Misfits song is sure to put all guests in the Halloween spirit.

KING DIAMOND – “HALLOWEEN”
“Every night to me is Halloween.” Does this lyric describe you? Sure, you may live your best spooky life every single day, but Halloween is the day where you can celebrate all things scary. And blast some King Diamond at your rad Halloween party. So put on your best King Diamond impersonation (which probably still sucks, to be honest) and scream “Halloween you are my pride!”

MOTÖRHEAD – “HELLRAISER”
You can play either the Motörhead or the Ozzy version and you’ll definitely get people stoked (but we’ll mention another Ozzy song in this list). This crazy catchy song was used in Hellraiser III: Hell on Earth. If you play this song at your Halloween party, there’s only one requirement—drink a Jack and Coke for Lemmy.

ALICE COOPER – “POISON”
No Halloween party is complete without Alice Cooper. His famous song “Poison” is a recognizable jam that will really get your party going! Sure, it’s technically a (weird) love song, but Alice Cooper and Halloween is like peanut butter and jelly. Any song by his will work, “Poison” just so happens to be a fantastic song. Another killer (literally) Alice Cooper song to play is “He’s Back (The Man Behind the Mask,” which is the theme song of Friday the 13th Part VI: Jason Lives.

OZZY OSBOURNE – “BARK AT THE MOON”
No Halloween party is complete without the Prince of Darkness making an appearance. While any Ozzy song will work, “Bark at the Moon” is arguably his most Halloweeny song. Whether or not your friends plan on barking at the moon, this Ozzy classic attracts all creatures of the night.

DOKKEN – “DREAM WARRIORS”
One thing you’ll notice about this list is many metal songs are inspired by horror movies. Of course, every metal fan knows this Dokken hit is the theme for Nightmare on Elm Street 3. And whether it’s Don Dokken’s signature voice or George Lynch’s genius guitar playing, Dokken will get any metal fan stoked.

ROB ZOMBIE – “DRAGULA”
Do you live your life “digging through the ditches” and “burning through the witches?” If you’re not “slamming in the back of your Dragula” at your Halloween party, you’re doing it wrong. Rob Zombie is always essential for every Halloween party. Celebrate with this famous song (and the equally awesome music video).

GHOST – “RITUAL”
Who knew singing about sacrificing humans could be so fun and catchy? Well, that’s what Ghost accomplished with this happy and dancey track that’s perfect for Halloween! You and your friends can sing-along to fun lyrics such as, “On this night of ritual / invoking our master / to procreate the unholy bastard.” For even more fun, sing the lyrics really loud and start a bonfire to make the neighbors think you’re actually holding a Satanic human sacrifice.

THE BEST DEATH METAL SONGS TO PLAY
Do you want your Halloween party to be more on the brutal side? Get a solid death metal playlist going! Here are some songs to get you started!

DEATH – “EVIL DEAD”
Evil Dead is the horror film that completes every Halloween party. That’s why you should also play the song that’s inspired by the famous film. From the legendary intro riff to Chuck Schuldiner screaming, “Evil dead!” this song is a staple in Death’s discography for a reason. And this song will also be a staple at your Halloween party!

POSSESSED – “THE EXORCIST”
Another song inspired by a famous horror film, Possessed’s “The Exorcist” reminds any death metal fan of Linda Blair’s spinning head. And what’s more Halloween than that? After you’re done watching Evil Dead, pop in The Exorcist and turn on some Possessed!

MORBID ANGEL – “VISIONS FROM THE DARK SIDE”
Early Morbid Angel just has a creepy vibe. Any song from Abominations of Desolation and Altars of Madness will work for a Halloween party. But the whole “take my mind again” and “leave me with these visions from the dark side” thing just screams Lovecraft and everything else creepy.

NECROPHAGIA – “BLEEDING TORMENT”
If you really want to throw a real death metal Halloween party, play some Necrophagia! Your pick should be something off the legendary Season of the Dead album. “Bleeding Torment” has some seriously brutal lyrics. Other good song choices on this album include “Beyond and Back” and “Mental Decay.”

Trick or treat! Whether you’re eating candy or drinking alcohol at your Halloween party, these songs are the perfect addition to your rock and metal Halloween party soundtrack.