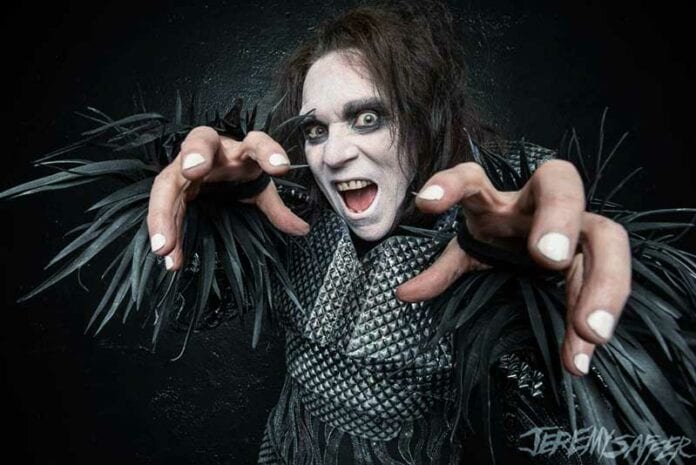 Lizzy Borden may take its namesake from an infamous murderer, but the band’s music is intended to take you on a visual journey like no other. Having just returned from a very successful tour with Tyr and Demons and Wizards, we had a great time chatting with the frontman himself about the tour, the anniversary of Visual Lies, and more.

What was the most memorable aspect of your recent tour?
The thing that stood out is that all of the shows were great. That never happens on a tour. Usually, you’ll have an off night, not necessarily in a performance mode but as far as the audience response, because it’s a Tuesday night or whatever. But every show on this tour, the crowd was unbelievably loud for all three bands. And that was the thing that struck me—all three bands were so different from each other. There were some things we had in common, but for the most part we were completely different from each other, and the audience responded pretty much the same to all three bands, which is something I don’t see in North America that much with heavy metal. Usually, you get all the same sounding bands and put them together, and it is just one big night of the same sort of music. But in this case, you got three different forms of music, and it completely split genres. The audience really, really loved every band. So, I thought that was pretty amazing.

How did you feel all of the bands flowed together despite being different facets of the metal genre?
There are some things we have in common. We have pretty much all of our influences in the late 70s/early 80s—all the same bands we’ve all heard a million times that seeped into our songwriting. So, you have those kinds of elements. Personally, though, we were all on the same page and it was really amazing. There was no one on the tour that was an egotistical person or anything like that. It was really a blast the whole time. True camaraderie. I turned the tour down when it was offered to me. I just didn’t think we were compatible. I didn’t think it was gonna work. I didn’t think North America could handle that, because this is something you see in Europe a lot, but you don’t see it in North America. They usually just put the same sounding bands together. Of course, there are exceptions, but most of the time that’s the way they do it. So, I turned it down, and then the record company sat me down and just said, “Look, it’s a different world now,” and because we don’t really concentrate on North America as much as we should, I decided to take a chance. I’m really happy that I did. It really worked out well.

“THERE ARE SO MANY OTHER THINGS HAPPENING. IT’S VERY INTERESTING TO SEE WHERE EVERYTHING IS GOING TO GO.”

What is the biggest difference in the music industry that you’ve seen between when you first began and how it is now?
When we first started, the chance of even getting a record deal was not going to happen. The chance of putting out an album was not going to happen. No way. All of a sudden, there’s this underground surge that could actually happen. Back then when we put out an album, it kind of reached the other people that were interested all over the world. Now, the music industry is saturated. We had an instant fan base from all over the world that we’ve never even thought of even going to. We were just this little Hollywood band and all of a sudden we have a fan base all over just because we’ve put out an EP or an album that most people couldn’t put out. So, that was the biggest difference now. Anyone can put out an album now. There’s so much music saturating out there, and some of it is goodness, some of it is horror. I don’t know where it goes from here because it is saturated, and as such, no one can rise. When we put out our album, we were one of the few bands. Now we are just one of hundreds of thousands of bands all over the world. It’s a lot harder to get the word out and get the attention that you may deserve just because there are so many other things happening. It’s very interesting to see where everything is going to go. When we started, it was the Wild West. Now we’re back at that same thing. You can kind of see where it’s heading, but you just don’t really know. Technology is going to be the guiding force. We just have to follow along and see what happens.

With the anniversary of Visual Lies, how do you feel you’ve grown as a musician in these 32 years?
Well, Visual Lies was pretty much our coming out album. It was the one that we finally realized how to deal with the studio. We finally hired a real producer. To me, it’s my first album because it’s the album that we actually knew what we were doing more so than the first two albums we had—we didn’t have a clue. With that album, I purposely made sure to write songs, and I didn’t want to write these big long musical pieces with a hole on top. I wanted to write songs, and so we found a producer, Max Norman, and he changed us. He worked with us in tempo control, which was probably the biggest factor in our change because we had no tempo control. We didn’t even know what that was! We just played it how we felt it, and he’s saying, “No, you’re wrecking this song by playing it too fast or too slow.” That’s when I realized and went, “Oh my god, that’s true.” We learned so much from that album. It was really easy to say that’s the thing that broke ground for us, and obviously it was. It’s one of my biggest selling albums, so we did it right I think. And so yeah, since then I’ve used a lot of those same techniques on every album.

Your shows are very theatrical.
That part of it hasn’t really changed because I’m always writing the lyrics of a song all together, and I’ve always picked a certain character and I envision what this character looks like and what he’s dealing with—how he moves through the songs and tells his little story. I envision what a stage show is going to look like, and I’ve done that from the first album. The audience is different every night. When we went to Europe for the first time in the 80s to play at festivals, that was very enlightening. We played a couple festivals in North America, and it was so different than in Europe. That made me alter songs and put other songs in because the response was there. So, I do that same sort of thing now. I know what the audience is going to respond to and what they’re not. And so I just edit it and take out pieces that I know we’re going to fall flat on and add the ones that I know we are going to get a reaction from. The audience dictates how I put the show together, but also using my main character as the vehicle for the whole thing. This last set of shows, everyone said it’s one of the best shows they’ve ever seen. And there’s been people who’ve seen our show hundreds of times all over the world, and they said this is the best show they’ve ever seen. Sonically now we are starting to match what we’re doing on stage, because we always have the visuals, but sometimes you’re going to play some place where the sound is not great. I’m really embracing and trying to realize that I need the audio to match the theatrical instead of just this big chaotic ball of energy, so we can actually make it sound sonically amazing and match the visuals plus who I am.

Favorite axe murderer?
(laughs) You know, it’s weird. I don’t even know anything about the original Lizzie Borden murder. I really don’t. I purposely didn’t want to know because I really wanted to take this opportunity to make it my own. I just liked the name and I took the name and I wanted to expand on that and create my own thing. So, really, I never dove deep into all of that stuff and I’ve only done one album about horror, and the rest of them have all been about darkness and some of those elements. I never really embraced all of that. But I do love the visuals of what I do onstage, but only parts of the live show are horror themed.