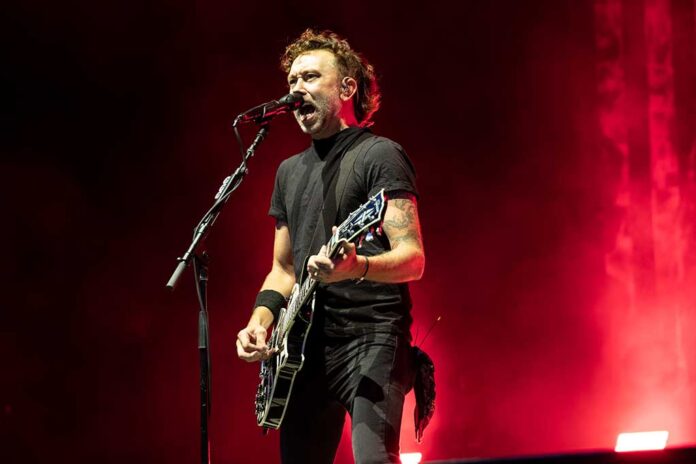 The show opened with Senses Fail, with James “Buddy” Nielsen (lead vocals), Steve Carey (drums), Greg Styliades (bass), Jason Milbank (guitar), and Gavin Caswell (guitar). A respectable sized crowd made it a point to be early enough to witness Senses Fail deliver a killer set, and their enthusiasm only grew as they played each song. They opened their set with “Can’t Be Saved,” and went on to include “Buried a Lie,” “Bite to Break Skin,” “Calling All Cars,” “End of the World/A Game of Chess,” and closed with “Death by Water.”

Up next was The Used, with Bert McCracken (vocals), Jeph Howard (bass), Dan Whitesides (drums), and Joey Bradford (guitar). The Used opened with “Maybe Memories” and continued with “Take It Away,” “The Bird and the Worm,” “Sound Effects and Overdramatics,” “Listening,” and “Blow Me.” By this time, the mosh pit was getting warmed up and cups of various liquids were flying. McCracken took a moment to engage the crowd, asking for those in the general admission pit to part and create a mosh pit wall of death while he quoted lines from Shakespeare’s Hamlet, “To sleep: perchance to dream: ay, there’s the rub; For in that sleep of death what dreams may come When we have shuffled off this mortal coil must give us pause…”

The rest of The Used’s set included “I Caught Fire,” “The Taste of Ink,” “All That I’ve Got,” “Blood on My Hands,” “Pretty Handsome Awkward,” and closed with “A Box Full of Sharp Objects,” which transitioned into part of Nirvana’s “Smells Like Teen Spirit.” The crowd started chanting, but McCracken struggled to hear. It took him a few seconds to realize that the crowd was calling for “10 more songs!”

By this time, the sun had set, the temperature had cooled, the smoke machine was smoking, and the crowd was ready for the main event, Rise Against. Tim McIlrath (vocals, rhythm guitar), Joe Principe (bass), Brandon Barnes (drums), and Zach Blair (guitar) walked onto the stage to a packed venue and steady enthusiasm. I had a hard time taking my eyes off of the mosh pit, as it was so dark, and the only illumination on the heads of the people throwing themselves in each other were the constantly changing red and blue stage lights, which created an illusion of fire and water dancing in the crowd. While the crowd raged on, the band raged with them, furiously moving throughout the stage, on top of risers, back and forth, and never standing still for more than a few seconds, feeding off the energy of the crowd.

Their set consisted of “Prayer of the Refugees,” “The Violence,” “Satellite,” “Help Is on the Way,” “Ready to Fall,” and “Last Man Standing.” McIlrath took a few minutes to address the audience, especially those seeing them for the first time, about the Rise Against Revolution. “That word, ‘Revolution,’ has been thrown around by a lot of different people, and I’m not here to tell you what it is, but I will tell you what it ISN’T, because that’s something I figured out. Revolution: there is no racism in revolution, Santa Barbara. There is no sexism in revolution, that’s NOT a revolution. There is no homophobia in revolution. That is NOT a fucking revolution. There’s no nationalism. There’s no xenophobia in the Rise Against Revolution…”

Rise Against then continued with the rest of the set, “Collapse (Post-Amerika),” “Re-Education (Through Labor),” “I Don’t Want to Be Here Anymore,” “Dancing for Rain,” “Make It Stop (September’s Children),” “Hero of War,” “Nowhere Generation,” “Give It All,” “Survive,” and closed with “Savior.”