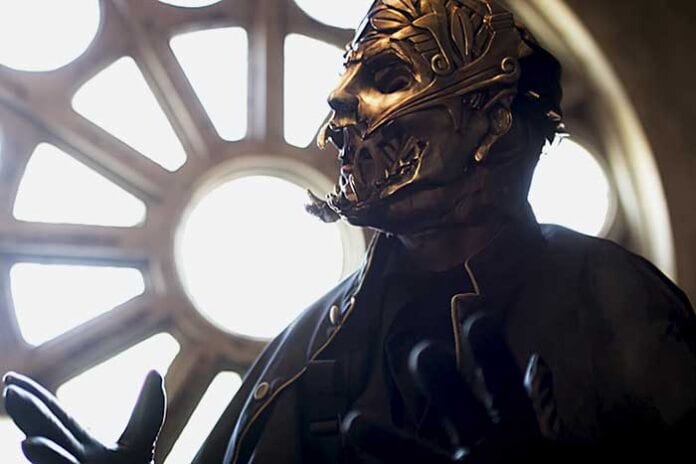 Cleveland industrial/alt-metal octet, Mushroomhead, unleashed a free YouTube streaming event on Valentine’s Day to premiere a double feature of cinematic videos of previous tracks “Carry On” and ”Madness Within” that appeared on its eighth full-length album, A Wonderful Life (released June 19, 2020 through Napalm Records), along with a ton of extras.

Coming off the heels of A Wonderful Life, Mushroomhead never had the chance to play live due to the global pandemic that’s been interrupting the music industry since March 2020. With the “Shroomhouse” Double Feature, the band has crafted a dark, macabre masterpiece full of horrific atmospheres, massive dynamics, and terrifying melodies.

The haunting horror movie-esque videos also introduced brand new band masks and costumes by the band. There were also bits of old-fashioned intermission time and mock commercials similar to old cinema movies, which possessed a great old school vibe. The haunting visuals of movie sample The Possession of Father Thomas segued wonderfully into the “Madness Within” video debut.

Overall, Mushroomhead’s Shroomhouse Double Feature was a cool foray into the twisted minds of the band. Hopefully, this will allow Mushroomhead to take more advantage of this medium and their creativity to produce more cinematic journeys such as this. ~ Kelley Simms