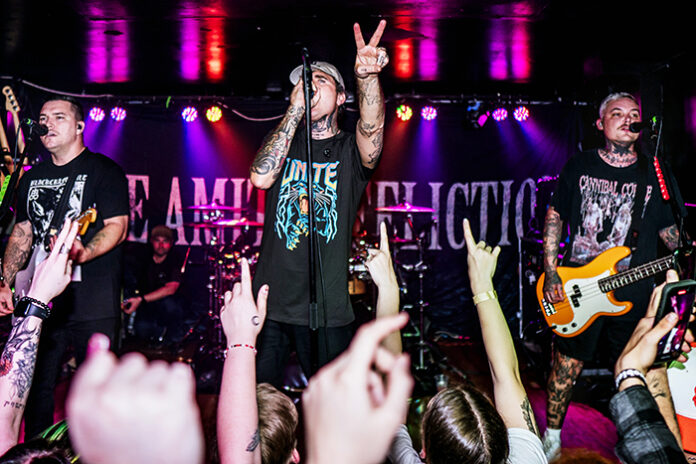 On Sunday, April 10th, Australian metalcore band The Amity Affliction brought their headlining tour to the Webster Underground in Hartford, Connecticut. The event sold out weeks in advance, allowing fans to build their excitement for an exceptional show.

Opening the evening was California natives The Seafloor Cinema, a three-piece group with an emo/pop punk blend sound. The band brought positive energy and smiles across the room, creating the perfect beginning to the night.

Following The Seafloor Cinema, was Arizona rock group Archetypes Collide, and they made the room come alive. Lead singer Kyle Pastor hopped into the crowd and started a mosh pit himself, and the band had the crowd going wild when they covered Linkin Park’s “One Step Closer.”

As each band played, the energy in the room grew in anticipation for The Amity Affliction. The Underground was packed with fans from wall-to-wall, filling every crevice the room had to offer. As the lights dimmed and smoke filled the room, the band ran onto the stage, opening with their hit “Pittsburgh”from 2015 album Let the Ocean Take Me.

The Amity Affliction played songs from each of their albums, and fans sang every word with lead Joel Birch. “D.I.E.” off the album Misery was a crowd favorite. The strong emotions evoked by the direct lyrics of the song moved the entire room, screaming the chorus with every ounce of themselves. Birch gave the audience a 10 out of 10 for singing along, as not a single person missed a word of the entire set.

The band ended its set with “Don’t Lean on Me”from Let the Ocean Take Me, until the crowd begged for just one more song. The band turned around and closed out the night with “Soak Me in Bleach”from the album Everyone Loves You… Once You Leave Them, a song of intensely dark lyricism.

There were tears and there were smiles. The introspective lyrics and vivacity of The Amity Affliction’s performance created an emotionally validating experience for fans, and it was clear no one wanted the night to end.