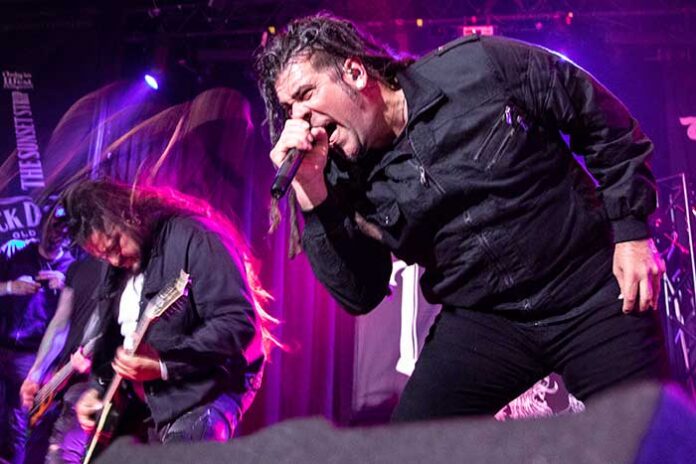 LIONS AT THE GATE with Breaking in Sequence and Thrown into Exile
West Hollywood, CA
Whisky a Go Go
04.28.22

On the night of April 28, 2022 at the Whisky a Go Go, Lions at the Gate introduced themselves as a new band, live, on stage for the first time. And the band did not come to West Hollywood alone. It wouldn’t be a proper celebration if they didn’t bring along some friends to share in this triumph.

The first band to get this party started was Breaking in a Sequence, formed by David Silveria (drums), with Rich Nguyen (vocals), Joe Taback (guitar), Chris Dorame (bass), and Mike Martin (guitar). Unfortunately, Silveria was unable to perform due to scheduling conflicts. However, we were fortunate in that Fred Aching was able to fill in on drums, who, like everyone else in the band, absolutely killed it. Breaking in a Sequence opened their set with “Twine,” followed by “Worn Down,” “Surprise,” “Leave Me Be,” “A New Line,” “Unsavory,” and “Naive.” By the time the band got to its final song, “Delusional,” the crowd was hyped and excited for more.

Up next was one of LA’s favorite local bands, Thrown into Exile, with Joey Dalo (vocals), Mario Rubio (guitar), Ray Sanchez (guitar), Dave Corsile (bass), and the shirtless Tom Tierney (drums). Thrown into Exile opened with “Beyond the Grey” and sent the audience into a frenzy, which grew more intense as the set went on. They continued the rest of their set with “Lower Self,” “Wake of Fire,” “The Mourning,” and “The Wronged.” Each member of the band not only engaged with the audience, but also with each other, moving around the stage constantly. They closed with their 2016 single, “No Words.”

After much anticipation, Lions at the Gate took the stage for the very first time, comprised of former Ill Niño members Cristian Machado (vocals), Diego Verduzco (guitar), Ahrue Luster (guitar), Stephen Brewer (bass), and Fern Lemus (drums). This night was not just about introducing Lions at the Gate to fans in person, this premiere party was also about debuting a few new, never before heard songs. After a very brief instrumental intro, the band opened with its first single, “Not Even Human,” and immediately followed with the single “Scapegoat.”

Machado took the mic for a brief introduction of their next song, which had never been heard before, “Drain,” and he asked the audience to keep it amongst themselves, even though he knew that wasn’t going to happen as everyone’s cell phones were raised. Next came one of their already released singles, “Bed of Nails,” followed by two new songs, “Ledge” and “Digital Sea.” By this time, the venue was packed, both upstairs and the downstairs floor. The mosh pit was going full force, and every so often, would come to an abrupt halt as people rushed to help up their fallen brothers, only to immediately begin again. Lions at the Gate closed with their latest single, “Find My Way.”

Even though the incredible live music had ended, the party was not over. Machado grabbed the mic one last time to announce that after they clear the stage, the band will return to join the fans for drinks and encouraged everyone to come over to chat with them and grab some photos.