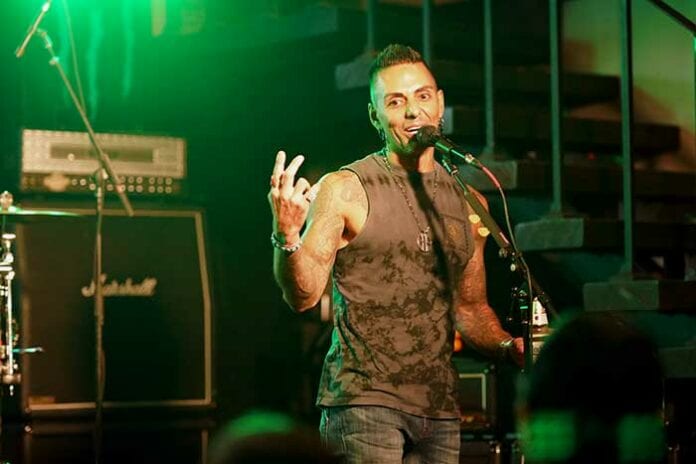 “Our Taco Metal Parties are pretty famous now after all of these years. They are famous because they are a really cool, positive gathering—a love of metal, tacos, Mexican beer, and margaritas! A perfect combination recipe for a good time in my head! All of the bands I pick are friends and bands that I support on SiriusXM. There is no criteria. Today, Jinjer and Alien Weaponry were going to be in sort of the same area at sort of the same time, and I had to make it happen! I wanted to throw a party for them because these are two bands that we really push hard on SiriusXM Liquid Metal. These are two bands that are champions of the new movement. Jinjer and Alien Weaponry are success stories, showing how we can introduce people to music and get them excited to go to the shows,” exclaims Jose Mangin.

Jose Mangin is best known as the host of SiriusXM’s Liquid Metal radio show and has brought the attention of thousands of listeners to some of the most incredible and unique bands in the world. Having had over 40 of these Taco Metal Parties, featuring past performances from artists such as Stone Sour, Megadeth, and Jonathan Davis, this time New Zealand band Alien Weaponry and Ukrainian act Jinjer, two of Napalm Records’ most buzzed about artists, were on the list. The night took place at the Affliction Headquarters in Seal Beach, a company that has long been popular for their edgy designs. An absolutely packed house, a slew of fans were waiting in line for hours to come in and partake in a night of live music, tacos, and great company.

“We’ve been doing this for, I think, three years, starting with Megadeth—a release party for Dystopia! It just went crazy after that. We’ve done a lot of cool Taco Metal Parties at the Affliction headquarters—they’re super cool to support—here in Seal Beach. It’s not a concert, it’s not an event, it’s a house party. We invite everyone in the metal community and those that aren’t in the metal community! We try to make it very welcoming for everyone,” continues Jose.

Alien Weaponry led the charge, opening the evening with a few of their best known songs. Those that haven’t heard of the act before tend to find a fascination the moment they realize how young the members of the group are, and are even further entranced when hearing a language sung that many may not even be aware of… Māori. Having formed in Waipu, New Zealand in 2010, the band consists of brothers Lewis de Jong (guitar, vocals) and Henry de Jong (drums), as well as Ethan Trembath (bass). All three members have Māori ancestry, and several of their songs are written in the Māori language, bringing awareness to this lesser known Polynesian culture. Unfortunately, Ethan was not participating in this tour in order to finish high school, but the bass spot has been filled by the very talented Bobby Oblak. The lads played a rather candid and fun set, showcasing their expertise immaculately.

A quick changeover traversed the crowd away from New Zealand all the way to Eastern Europe. Jinjer, a female fronted band from Ukraine, has absolutely taken the world by storm with their extremely powerful music (both melodically and vocally). Formed in 2009, metalheads have been drooling for a band like Jinjer, delivering a live performance just as phenomenal as the music itself. Since their inception, the band has released three full-length albums and three EPs. Right on the cusp of releasing new material, this performance was well scheduled for the band’s great traction, as their current tour dates are all selling out! Jinjer delivered a performance like no other, even in a small space, vocalist Tatiana Shmailyuk commanded the crowd and even found her way right into the thick of it mid set. Her musicians in crime—Roman Ibramkhalilov, Eugene Abdiukhanov, and Vladislav Ulasevich—all played with an immense fervor, complimenting their singer’s high energy.

The evening ended with great hangs between all of the bands and the fans that came out to see them, with the audience including members of DevilDriver, Ministry, and more wandering about.