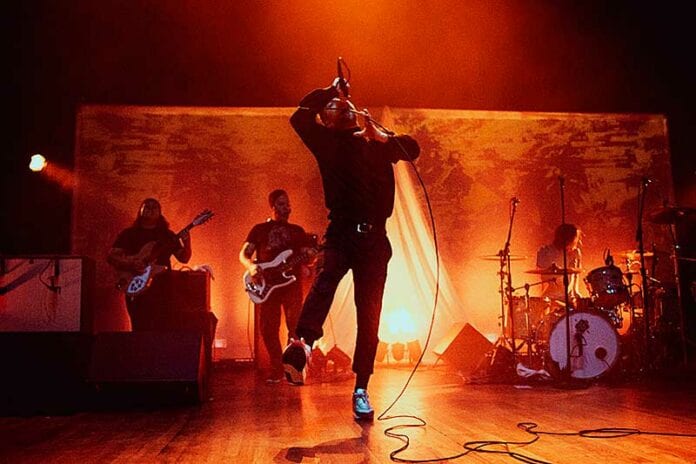 REVIEW AND PHOTOGRAPHS BY DOMINIQUE D’COSTA

For the first time on the road together since 2011, Touché Amoré and La Dispute brought their final tour of 2019 to The Palladium in Worcester, Massachusetts. Competing with another show occurring just upstairs, the bands were still able to pack out the venue with dedicated fans eager to see these post-hardcore acts.

Opening the show for this tour was the Philadelphia native, noise punk band Empath. The lights dimmed, and Empath entered the stage and immediately got down to business. The music began with intense drumming followed by experimental synth. The crowd was immediately transcended by the almost psychedelic sound of layered noise. Not missing a beat, Empath looped songs one after another from their debut album Active Listening: Night on Earth. Each member expressed their own personalities through their instruments, making every individual note more expressive than the last. It was clear that the members were passionate about their separate rolls in the band and yet were still able to blend their performances to create an overall unconventional and tantalizing experience.

The energy for the evening was only just beginning. The crowd hastily rushed towards the barricade as fan favorite Touché Amoré entered the stage. With a smile from ear to ear, lead singer Jeremy Bolm looked on to the adoring people before him, impressed with the turn out for their first time playing the main stage at The Palladium. Without hesitation Bolm hopped into the crowd so he could sing every lyric with the fans. The total spirit of the evening lifted with the positive energy that Touché Amoré brought to the stage by playing hits such as “Rapture” off their 2016 album Stage Four. Members ran around the stage hitting every note as if it were their last.

Just when it seemed as though the vivacity of the performance could not reach any higher, Jordan Dreyer, lead singer of La Dispute, took the stage, joining Touché Amoré in singing “Deflector,” the band’s newest released single. The bond the two vocalists share was evident throughout the entire song. They both moved and sang with complete synchronicity as fans went wild. Emotions ran high when the band began to play “Praise/Love” off their 2013 album Is Survived By. Every voice in the room screamed, “…myself exposed for everyone to see,” a truly beautiful moment unifying the band with every fan in the room.

Touché Amoré announced that they will be releasing a new album in the coming year, leaving their supporters excited for what the future will bring.

As time counted down until La Dispute’s set, the stage began to transform. Golden spotlights and an animated background projection were added, while the rest of the stage was lit with soft purples, greens, and yellows, promising an emotional performance.

It was finally time, La Dispute took the stage, and the audience was jumping with excitement. Each member took their position and was softly lit in gold. Once lead vocalist Jordan Dreyer entered the stage, he did not stop moving for the entire performance. He portrayed such strong emotions as if he were singing the lyrics for the very first time. This led the fans to invest themselves even more into the performance—each person sang for an individual purpose but overall because the music had truly moved them to their core.

La Dispute is known for their attention to sensitive and difficult subject matters such as mental health. Before playing “Hudsonville MI 1956” off their 2015 album Rooms of the House, Dreyer made a moving speech about caring for one another and the importance of supporting mental health awareness. This only proved that the band creates a safe space of acceptance for their fans whether it is at a performance or through the music itself.

The entire show took the audience through a consecutive emotional development, starting with songs of sadness and loss and moving up into hopefulness and positivity. During this journey, lead guitarist Chad Sterenberg also played the trumpet. He had fans mesmerized by his talent and the continuously developing sound the band creates. As the crowd begged for more, La Dispute ended the evening with not one but three encore songs, a majority of which Dreyer spent in the crowd singing with the band’s dedicated fans. This closed out a moving and unforgettable experience for all involved.