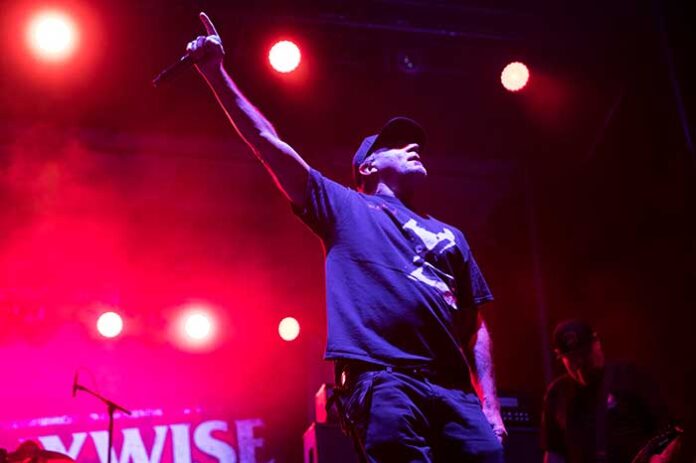 After being postponed several times due to the ongoing pandemic, the Punk in the Park festival finally took place at Oak Canyon Park in Silverado, California. The sold-out two day event, which included craft beer tasting from local Southern California breweries, turned out to be well worth the wait.

With plenty of sunshine yet somewhat mild temperatures, the gates opened just after noon, giving those who arrived early plenty of time to sample the beer selection. The music kicked off with the Raptors on the Monster stage, followed by the Hilltop Rats on the main stage, and with staggered start times, meaning fans did not have to worry about missing any of the bands.

Highlights from day one included Voodoo Glow Skulls (who were a last minute replacement for Pulley, who had to cancel their performance), Orange County punk rock icons T.S.O.L., Fear, Lagwagon (who performed their 1997 album Double Platinum in its entirety,) and The Vandals, whose near 75 minute set may have been the best of the entire weekend. Pennywise closed out the evening, bringing out a handful of guests including NOFX frontman Fat Mike for a cover of Bad Religion’s “Do What You Want.”

Day 2 picked up right where the day before left off, with old school sets from both D.I. and The Dickies on the Monster stage. Highlights from the main stage included Strung Out, Bouncing Souls, and Me First and the Gimme Gimmes (with both Fat Mike and CJ Ramone on bass), with a set that included covers of Dolly Parton’s “Jolene,” John Denver’s “Leaving on a Jet Plane,” and Paul Simon’s “Me and Julio Down by the Schoolyard,” all complete with hilarious introductions.

NOFX closed out the evening, and by the time they wrapped up the weekend, it was clear that the festival was nothing short of a total success, despite the postponements. Cheers to Punk in the Park, and here’s hoping that it will be back in 2022.