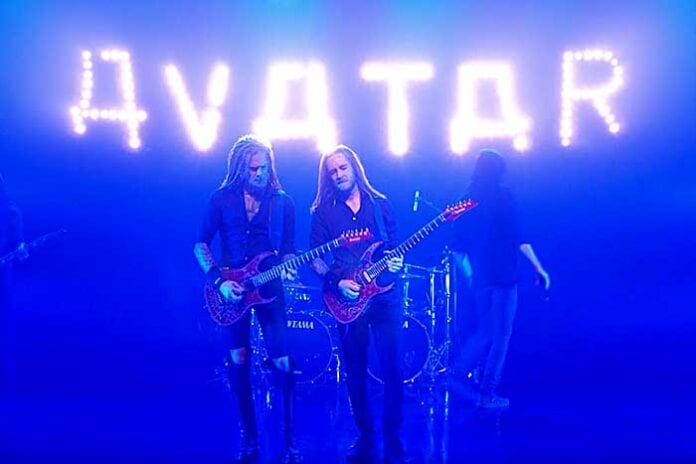 This month, I’ve spent a whole lot of time with the Swedish rockers Avatar and it’s been a wild ride. A wild ride that ended on a gorgeous note with this past Saturday’s livestream. With the theme of “Age of Memories,” it was my favorite performance of these past few weeks we’ve spent watching the band work their way through fan voted favorites off every album in their discography. Focusing on the band’s earlier albums with tracks off Thoughts of No Tomorrow, Schlacht, and playing the self-titled Avatar in its entirety, it was a wild but most excellent ride.

As the lights lifted, we saw an unmade up Johannes Eckerstrӧm stretched out on a couch where he painted the scene of what it’s like to be back in the rehearsal room. “It’s the place you weave your dreams, where ambitions are shaped. Where you think about the future,” he said as he continued to share anecdotes like being called the “underwear rockers.” Since the rehearsal room was so small and it would get so sweaty, they would strip down since they didn’t have a better choice.

These intimate moments with Eckerstrӧm set a strong precedent for easily the purest and most stripped back set we’ve seen these last few weeks. As the cameras came up, the set of several pink doors had been transformed into the talked about rehearsal space where the band was easily in the most toned down setting that we’ve seen yet. A harkening to the past, the band was clad in black button downs and skinny jeans all around with very minimal makeup if any, and were surrounded by old set lists and show posters on the wall. The setting lent the most humanizing energy to the band and was a non-stop 30 minutes or so of great interaction with the “audience” to goofing around with each other and mouthing “good job” to each other at points. Instead of being the big theatrical moments we’ve become used to, it was a pure rock show with some excellent what seemed to be some mental health checks to the crowd when introducing songs, which included Eckerstrӧm at one point introducing “Stranger,” going, “It’s quite a serious song, so I hope everybody out there watching is doing the best they can.”

As the lights go down about a half-hour into the set, there is a brilliant montage of some early video footage of the band and photos that humanized the band so much. Showing how much the band has transformed since those early years, these moments were one of the highlights over these past few weeks. Serving as the transition into a more familiar livestream setting, the lights came back up to show the band on a stage where they continued to focus less on theatrics and more on a full-blown rock performance. The rest of the set mostly consisted of the self-titled record, which falls into three categories according to Eckerstrӧm. “This album of ours is about five songs about drinking, four songs about fucking, and one song about computer games.” Joking with the band and the crowd throughout, he kept on saying, “Damn you guys for making me sing this one,” but continuing to smile throughout the set.

When the fourth livestream of the month for the band winded down, Johannes bid farewell with the band continuing to jam together as Eckerstrӧm headed to the piano, which is where we found him to start this month. As the frames closed out as he walked off set and outside with the widest grin on his face, Avatar flawlessly set the bar for the art of the livestream. It’s an art that many bands surely never assumed would be the option you had to take on for connecting with fans in these times. With a light at the end of the tunnel, hopefully, we’ll make a return to live music within 2021. But for now, take advantage of your favorite bands creating these live experiences. It’s the therapy we need right now, and just as much as we need it, your favorite artists need it too.