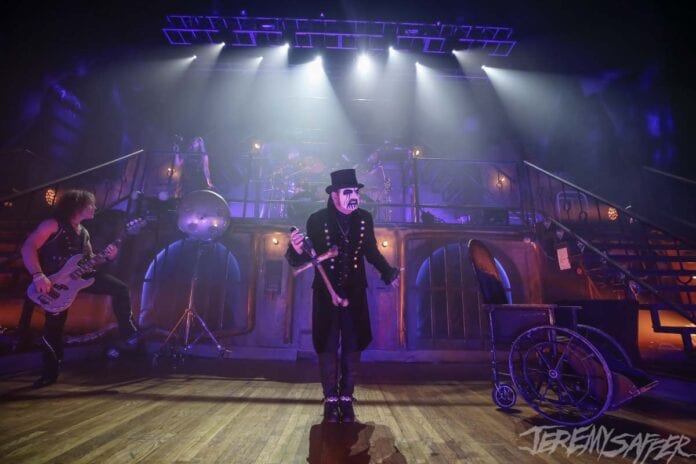 After four years, King Diamond has embarked on his first US tour since 2015. Tonight, we find the King appearing at the historic Worcester Palladium in Massachusetts to a packed crowd and full balcony of screaming fans. While he had some health issues in the past, with triple bypass heart surgery, it’s clear it has not slowed King Diamond down, nor has he skipped a beat.

The lights dim, the crowd roars, and a lifeless King Diamond is rolled onto stage on a hospital gurney. He comes to life, staggering to the immaculate set behind him to flip a large electric switch, igniting the show and grabbing his iconic crossbones microphone to kick off the first track on the first King Diamond album, The Candle.

With a three-tier stage set looking like a mental hospital one would never want to visit, King makes full use of the incredible props, extras, and stage set. The band consisting of Andy LaRocque (guitar), Mike Wead (guitar), Matt Thompson (drums), Pontus Egberg (bass), King’s own wife Livia Zita doing background and choir vocals, and actress Jodi Cachia on stage for most songs as different characters.

The band continued on with a string of classic King Diamond songs, each with its own set of props. An infant coffin was wheeled on stage by hooded figures with the word “Abigail” written across it, as King held up a child-like doll and a knife. The doll suffered some mortal wounds before being thrown back into the coffin, kicking off the Abigail classics “Arrival” and “A Mansion in Darkness.”

King added a not so commonly performed song, “Voodoo,” to the set followed by an orange light soaked stage for the October 31st King Diamond anthem “Halloween.”

King addressed his audience, letting them know a new song had been released just that very day, and he was about to perform it for them. “Masquerade of Madness” may be a new song from King Diamond, but it does not lack his classic and signature sound. With actress Jodi rising from an asylum bed, King helps her down the stairs to the stage where he serenades the crowd as she tries to remove the mask. The song ends, and she is sent into the door marked “9” in the middle of the set, where all characters and props generally end up.

Next, a crowd favorite, the iconic grandma in her wheelchair is wheeled on stage as King kicks off “Welcome Home.” This performance is a great example of showing how the King Diamond show goes above and beyond just a band playing music, and it truly is a show, a performance worth seeing again and again.

King dedicated a song to the doctor who performed surgery on him and announced that he was in attendance. Unlike most shows, there was no exit from the stage and a moment of “will there be an encore?” Instead, the band kept playing through the entire set, which was refreshing.

After a few more classics, King went on to dedicate “Black Horsemen” to fallen King Diamond and Mercyful Fate bassist Timi Hansen, who had passed just a week earlier. This was the last song of the night, as the band gave their thanks and exited through the door marked “9” as the house lights came on and the show was over.

The set list mostly stuck to classic 80s King Diamond, only dipping into his 90s material twice, and, of course, the new song “Masquerade of Madness.” Oddly absent were any songs by Mercyful Fate, which had always been a staple of King Diamond shows. With the announcement of a Mercyful Fate reunion in 2020, it could only mean that you will have to catch Mercyful Fate themselves to hear any that band’s songs live. It’s also interesting that King didn’t perform more than two songs from his extensive catalog from 1990 until now, skipping entirely over six albums. Regardless of a lack of 90s and 00s material, the entire show King Diamond and the cast put on was incredible and certainly a treat, especially for King Diamond fans that want to hear his early legacy come to life on stage.

King Diamond is a performance not to be missed, as Mercyful Fate gears up for a reunion and King prepares his first new album in over a decade. This performance was a great refresher on how incredible a show this band puts on and gets us super excited for what’s to come in 2020.