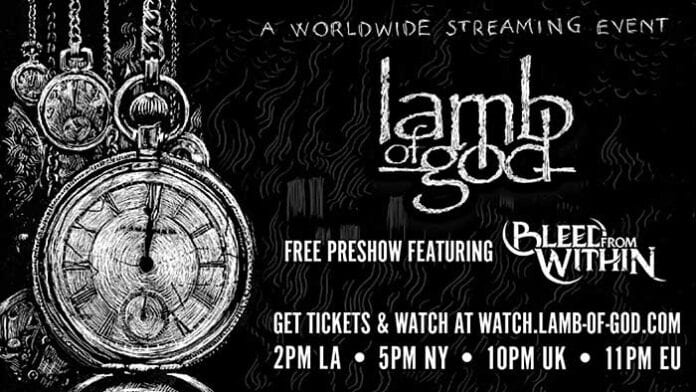 Due to the current global pandemic, groove metal maestros Lamb of God would’ve already been on tour supporting its latest self-titled record (released June 19 via Epic Records). Since tours, festivals, and concerts have been cancelled due to the Coronavirus, Lamb of God decided to do the next best thing by hosting an exclusive global streaming headline performance broadcasted from a studio in Richmond, Virginia on Friday, September 18.

Out of necessity, this type of format has become the new (ab)normal in the way music concerts have progressed. Hey, us metalheads will take it any way we can right now. Bands are capitalizing on it, too. These virtual tours and streaming events, as well as drive-in concerts, like the recent show Metallica put on, have fared really well

This is the first time Lamb of God has ever presented something like this—to play an album in its entirety from front to back. It’s great for the fans too, because if you saw them live, they wouldn’t be doing the whole self-titled album, only just a few tracks from it. However, a live show is paramount to crowd chanting and sing-alongs. It’s that energy it gives off to the band that makes a live show special. However, think of it as a pay per view or when you watch a DVD concert, you see the audience having fun, the band is performing at a high intensity, and you wish you could’ve been there. This event is sort of like that experience, only you are experiencing it in the now instead of watching it after the fact as a DVD.

For the Lamb of God performance, there were a few bundle options, with the simplest and cheapest being $15, which included exclusive access to merchandise. Paid viewers are able to view the show for 48 hours after purchase.

Lamb of God, featuring vocalist D. Randall Blythe, bassist John Campbell, new drummer Art Cruz, and guitarists Mark Morton and Willie Adler, put on a no frills, energetic performance with flawless precision. There wasn’t really much of stage show, preferring to let the music do the talking with the main focal point being Randy. There were some decent multi-camera angles with some extreme close-ups, although sometimes becoming a little shifty and in and out of focus. But that only enhanced the raw charm of the presentation.

After running through the whole 10 track self-titled album with only a few short pauses, the band performed an “encore” consisting of “Contractor,” “Ruin,” and “The Death of Us” from the Bill & Ted Face the Music’s Original Motion Picture Soundtrack. The band finally closed the evening with “512” from VII: Sturm und Drang, with the entire show lasting a little more than an hour

Pre-show festivities started an hour earlier and was hosted by Jose Mangin of Sirius XM’s Liquid Metal show, featuring exclusive interviews with the band. Scottish modern metal band Bleed from Within opened the set with a solid performance.

Lamb of God will present another global streaming live show on Sept. 25 by performing its 2004 groundbreaking Ashes of the Wake album in its entirety for the first time ever. The Lamb of God stream is scheduled to begin at 5 p.m. EDT/2 p.m. PDT. Livestream tickets will be $15 per show and are on-sale now at http://watch.lamb-of-god.com.