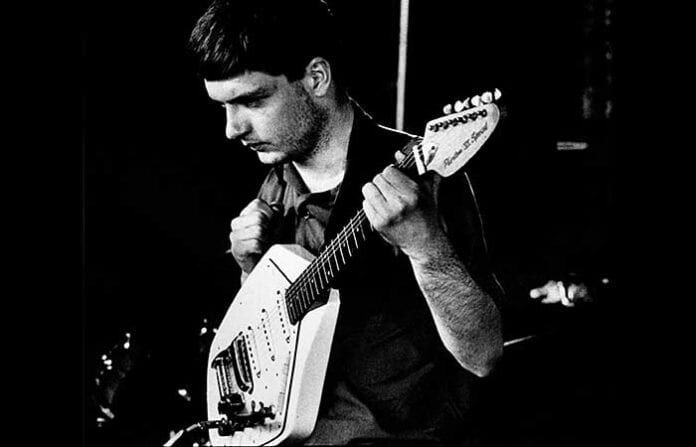 THE VOX PHANTOM VI SPECIAL GUITAR OWNED BY IAN CURTIS AND PLAYED IN THE VIDEO FOR “LOVE WILL TEAR US APART”
BIDS START AT $78,000 – $100,000
GO TO ONLINE AUCTION HERE

Considered by many as a British cultural icon who had a once-in-a-generation talent, Ian Curtis’s musical legacy, even 40 years on, is as strong as ever. Despite a short career, Ian’s association with Joy Division as a fascinating and enigmatic figure was instrumental in the band becoming pioneers of the post-punk movement with their debut album ‘Unknown Pleasures’, released by Factory Records in 1979. Now regarded as one of the best albums of all time, it’s said ‘Unknown Pleasures’ defined not only the city of Manchester, but a moment of social change. Through his complex and melancholic song-writing, his distinct vocals, and commanding stage presence, Ian has managed to leave a lasting influence on musicians everywhere, and the music industry has never quite been the same since.

Formed in 1976 in Salford, Greater Manchester, Joy Division (originally named Warsaw) consisted of singer and ‘song-poet’ Ian Curtis, guitarist and keyboardist Bernard Sumner, bass player Peter Hook, and drummer Stephen Morris (who joined in 1977). Inspired by other musicians such as David Bowie, Kraftwerk, Sex Pistols, Jim Morrison, Iggy Pop, Roxy Music and Lou Reed, Ian’s vision had a powerful impact on the band, resulting in Joy Division moving away from the typical ‘punk sound’ of the time, and instead creating their own sound, now considered as the start of the post-punk movement.

Bought in September of 1979 by Joy Division’s manager, Rob Gretton, this Phantom Vox was the guitar used by Ian on stage during Joy Division’s 1980 European Tour, as well as on the recording of their track “Heart and Soul”, and features throughout the music video for the timeless hit “Love Will Tear Us Apart”. As photography shows, Ian can be seen playing this guitar at several venues during the band’s 1980 tour, the best-known imagery being those atmospheric shots taken by photographer Anton Corbijn – who is responsible for much of the band’s early photography. Corbijn is also the creator for the music video for the re-release of Joy Division’s hit “Atmosphere” in 1988, and directed the Ian Curtis biopic Control, released in 2007.

Joy Division recorded their single “Love Will Tear Us Apart” at Pennine Studios, Oldham, on 8th January 1980, along with the B-side, “These Days”. This version was very similar to the version the band played live, however the band later re-recorded the single with producer Martin Hannett at Strawberry Studios, Stockport in March 1980. By March of the same year, the band were recording their second studio album Closer, recorded at Britannia Row Studios in Islington, London. It is said Ian played this Vox on the track “Heart and Soul” on this album; in an interview for Pat Graham’s book, Instrument, Bernard Sumner states: Ian really liked this guitar. The Phantom had tons of effects built into it, as an added bonus. It had a pause unit, and a thing called the ‘replat’. When we got the guitar, half the effects didn’t work, and we were thinking, “what the hell is replat?” We got the guitar repaired, and it turned out that ‘replat’ is actually ‘repeat’ – it was just a misprint. The guitar has a battery in it, and if you press the buttons in the wrong combination it will go into self-oscillate mode and start to make this strange twittering sound that Ian liked very much. It is a pretty wacky guitar. It sounded like some of the thinner guitars on Velvet Underground tracks, clean and jangly…”

Joy Division released their single “Love Will Tear Us Apart” on the 18th April 1980 on Factory Records. This was closely followed by the band filming their own promo video on the 28th April at T.J. Davidson’s studio on Little Peter Street, Manchester (a location they had rehearsed in at the start of their career). It is in this video, set in a disused mill, that Ian Curtis can be seen singing and playing his Vox Phantom guitar. A suitably gritty backdrop for a deceivingly melancholic track, this video has undeniably become a part of musical history. Sadly, this was the only music video Joy Division ever filmed, for Ian Curtis committed suicide at his home in Macclesfield just three weeks later in May 1980, on the eve of the band heading off for their first American tour. He was aged just 23. In Peter Hook’s book Unknown Pleasures: Inside Joy Division, he comments on Ian’s guitar playing, saying: “You could tell he would have been a great guitar player…He’d picked the guitar up late, starting around the time we were writing the sounds that would become ‘Closer’… He played in the video for “Love Will Tear Us Apart” and was obviously quite a rudimentary player, but you could tell he would have got so much better because he had that ear – he thought like a musician.”

Following Ian’s untimely death, the band released the video for “Love Will Tear Us Apart”in June 1980 and it has since gained over 63 million views on YouTube. Shortly after this the band released their second and final album, ‘Closer’, in July 1980. Upon its release the album went to no.6 in the charts and by 1982 had sold over 250,000 copies worldwide, with the posthumous single “Love Will Tear Us Apart” having sold over 160,000 copies. This year, 2020, therefore marks the 40th anniversary of not only this important music video, Joy Division’s last album, but also of Ian’s passing.

The Phantom Vox stayed with the band, who later that year became the prolific ‘New Order’, and was looked after and used by Bernard Sumner. Sumner has said: …we did use it on a couple of New Order recordings, the one I remember is “Everything’s Gone Green” (released in 1981). On the rhythm guitar part on that song, you can hear this guitar.” Music journalist Jon Savage has also said that it was played by Johnny Marr of The Smiths whilst part of his alternative dance supergroup Electronic with Bernard. Many years later, Bernard gifted the guitar to Ian’s daughter Natalie when she came of age in circa 2002. The guitar has remained in her possession since then.

“The guitar came to me at a time in my life when I was keen to learn more about my late father. I’m not at all musical, yet it is fascinating to see my father’s guitar, I mean, it’s such personal thing. Since I’m a visual person, the Phantom is especially interesting to me, as the design is rather unusual. I grew up around and have worked with musicians, and although I’ve seen a lot of guitars, I’ve never seen anything like this. From everything I’ve been told about my father, he was very obsessed with how things looked, and so to me the Phantom makes sense and very much feels like Ian Curtis’s guitar. It’s obviously super cool, regardless of its previous owner, and it sounds great, and even though I wouldn’t know what the hell to do with them, the geek in me loves all the built-in effects. If I had any kind of aptitude, it’s the sort of guitar I’d want for myself! As I didn’t know my father, it’s quite special to gain this further insight and to discover that our tastes align.” – Natalie Curtis, 2020.

The Vox Phantom model was originally introduced in 1962 by the Jennings company and, following a series of variations, the Mark VI Special was featured in Vox’s Autumn 1967 marketing material. It said of the battery-powered, built-in effects: Easy to operate, easy to memorise – the whole range of sound and effects is there with the guitarist, all the time. No accessories. No foot switches. The push buttons were for Treble Boost, Bass Boost, Top Boost, Mid Boost, Fuzz and Repeat Percussion. The rotary controls operated as pickup selector, a switch between three mid boost frequencies, Fuzz Sustain, Repeat Speed, Volume (also On/Off) and for enabling an ‘E’ reference tone to aid guitar tuning. The range of Vox’s guitars in their literature at the time promised The Exciting Sound And Way-Out Effects Of ‘68. Unique for its distinctive, pentagonal shape, which became part of the iconic representation of the British Invasion this Vox was originally made in Dartford in Kent, before manufacturing was later relocated to Italy.