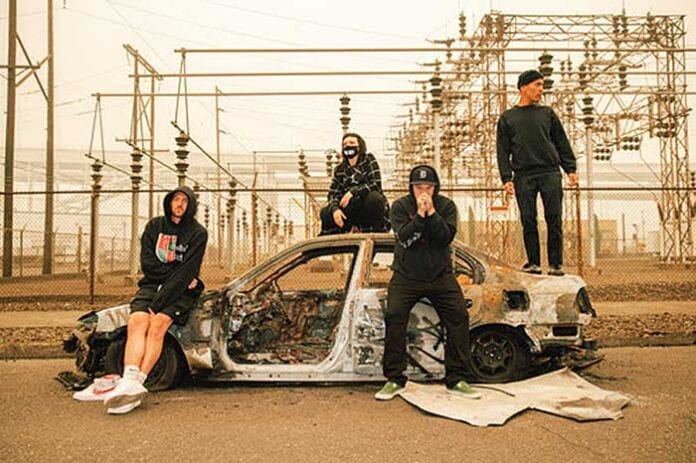 Today, the post-punk five piece, Portland’s Soft Kill shares their second single “Pretty Face” from their forthcoming November 20th album release Dead Kids, R.I.P. City, their long awaited follow up to 2018’s Savior. Says the band’s Tobias Grave, “‘Pretty Face’ was written immediately after finding out about the loss of our friend Zachary Delong. It recounts some time we spent together on the edge of oblivion, late 2011 into the first weeks of 2012. Survivors guilt pouring out into song form” – ‘Relax your pretty face boy, the pain has left you.’

“We shot this to be a lyric video but we worked in some scenes, starting in Washington and traveling into the far north section of Portland, stopping by the abandoned dog track at Portland Meadows and ending at the motel made famous by Drugstore Cowboy. The imagery will resonate with some, I’m sure. The song is one we’ve played live for two years and it’s got a big cult following without ever having a studio version circulating.”

“Pretty Face” encapsulates listeners with its steady pulse of bass and cinematic-like guitar melodies, taking a slightly left field approach to post-punk with its triumphant and upbeat energy while still channeling the doom/gloom sound Portland’s Soft Kill has built their identity around. The song reflects the darker side of what the band has experienced the past few years. The single follows Soft Kill’s return last month when they dropped the lead doom pop single “Roses All Around.” It’s dark yet luminous in every sense, from its driving percussive beats, harmonic grooves and melodies, while also creating an opportunity to openly discuss its sociopolitical message that is especially prominent now as Portland has become the epicenter of unrest these past few months.