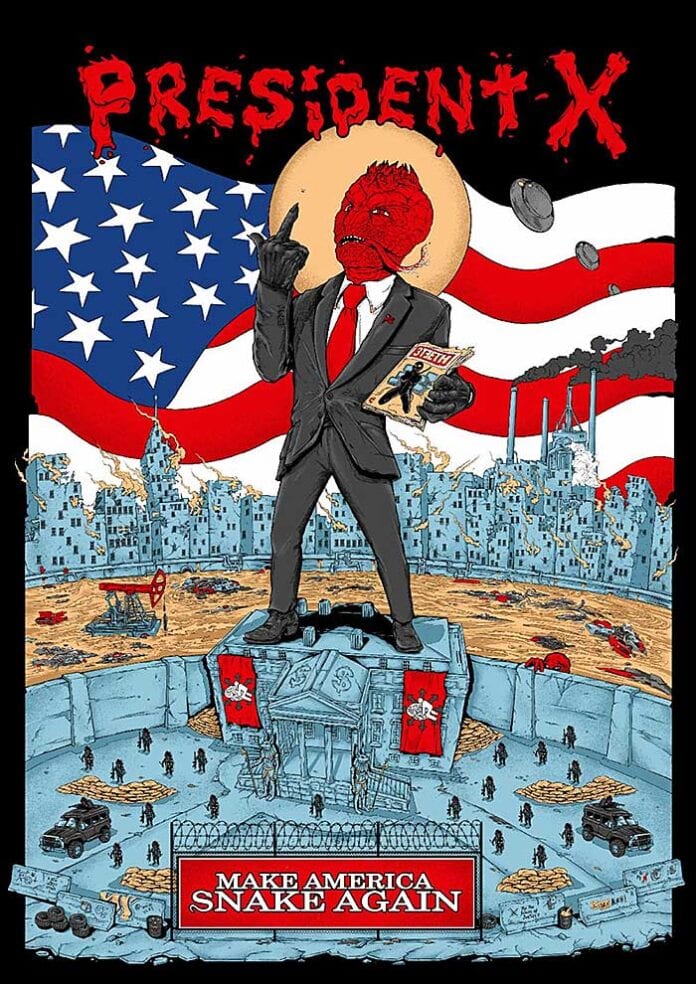 He states, ”President X is such a genius take on politi-calamity and that we’re all led by snake oil salesmen, it’s but natural that we hit Election day as an ode to the shitshow that is 2020. Most importantly this madness is true not just for America today, but an entire world led by megalomaniacs followed by a lost generation. Look around, every major country today is led by a supreme leader veiled dictator. But it’s also a sort of warning to the chaos that reigned in the 90s, I mean who can forget the Reagan era and the Gulf War greed. Call it a b-side rare remix to worldwide madness.”

1. Deporting true illegal Aliens
No man or woman upon this planet are intrinsically illegal as the native race according to intergalactic DNA code 99272911.1 but there are however a great deal of extraterrestrials in violation to intergalactic immigration laws by virtue of their resource hoarding. If elected I promise to release a list of all extra terrestrial beings in violation of resource hoarding and promise to deport them back to their native planets as well as seize all forms of their atomic gold.

2. Area 50FUN
I promise to turn Area 51 into an amusement park that’s run exclusively off dark matter allowing it to have zero carbon footprint which will serve as an example to other big businesses. It will also be complete with alien petting zoo, time distortion portals and quantum roller coasters. The goal will be to not only provide the human race with new intergalactic insights while simultaneously being fun for the whole family, but what’s more, is that all proceeds will go towards my next campaign promise.

3. Student Loan Debt down the black hole
Operating the amusement park off dark matter technology will become a big business case study for maximized profits proving that clean energy and unbridled capitalism can become vertically integrated with further caveats of social change as all proceed will go to freeing the American people from their debt slavery.

4. Dark Matter, matters.
We currently stand on the fulcrum point of our extinction due to the rudimentary and energetic failures of combustion energy. If elected I will develop a clear plan to trust bust big oil and reverse our current climate crisis through the use of protostellar nuclear fission and dark matter reactors.

5. A New Aeon of Celestial Foreign policy
It’s high time we expand our horizons in terms of foreign policy. With new dark matter technology we will be enabled to travel faster and further than ever imagined allowing us for the first time become a player in intergalactic politics and potentially allowing America to earn parliamentary seats in the Pleadian high council.

KATATONIA Premiere New Single “The Winter Of Our Passing”