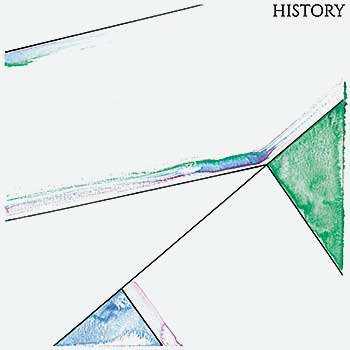 NOISY PUNK COLLAGE: Willed into existence a decade after the fact, History, an eponymous release from Daisy Caplan (Lung, Foxy Shazam) and Leo Ashline (Street Sects), was an album born out of artistic frustration and sustained hard drug use 10 years ago. The album was recorded in just two days in a basement (which you’ll understand as you listen), as Ashline was deep in the weeds on a prolonged drug induced bender, as Caplan was on the road touring with Foxy Shazam. But, just as the writing and recording of this album drove Ashline to the brink and eventually caused him to hit rock-bottom, it was these songs, these words, that helped push him to rehab, sobriety, and a clean life that he still upholds to this day.

History is manic, unpredictable, noisy, quirky, and downright weird. Opener “Breadline” sounds familiar, emulating a raw, garage version of Foxy Shazam at certain points, a sound that bleeds over onto “Fiscal,” a spastic entry that registers as one of the album’s best tracks. “Landhammers” is also eccentric to say the very least. At times, History sounds tortured (“Butter Teeth”), full of dissonant pained vocal refrains (par for the course given the circumstances surrounding the writing of these songs) and trashy percussion. At others, it comes off as a horrifying amalgamation of noise (“Gaslight”) or a strange lullaby (“Clown”). Ashline’s strenuous delivery returns on the album closer, “Fear,” for one last jolt to your nervous system.

We’re not entirely sure who the right audience is for an album like History. It’s an intriguing listen, one that fans of noise, and perhaps even Foxy Shazam worshippers, could enjoy. It’s a struggle to put this album into a proper context over the course of these few hundred words, as we’re still fighting to really comprehend what we’ve have just heard. ~ Brian Campbell

HE IS LEGEND: White Bat