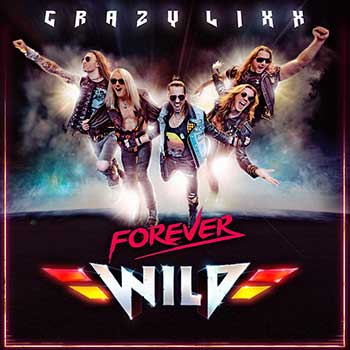 HIGH-OCTANE HAIR METAL: Genre cycles come and go, it’s just the nature of the beast. For every Bay Area thrash scene, there’s a retro speed metal revival. For every Stockholm or Florida death metal band, there’s a generation of new bands trying to be the next Entombed or Morbid Angel. It’s a similar story with Sweden’s Crazy Lixx, who’ve been leading the charge for melodic, high-octane hair metal from the Sunset Strip since the mid millennium. Similar in a way to The Night Flight Orchestra’s charge for AOR, Crazy Lixx is the gold standard when it comes to hot shit heavy metal that’s catchier than herpes at Coachella and with more riffs than a George Lynch lookalike convention.

If you don’t dig this sort of thing, then by all means, stop reading now, because this writer loves him some hair metal. And not in an ironic way, either, but the sort of pedantic obsession that has CDs from bands like Banshee, Icon, Heaven’s Edge, and Bangalore Choir in my collection. As a result, Forever Wild has all of the ingredients to make it stand out in a crowded field, particularly when it comes to songwriting. Sure, by this point we all know the tried-and-true 80s formula of “anthem rocker ballad,” rinse/repeat for quick success. Crazy Lixx embraces that aesthetic, but does so without feeling tired or cliché. Instead, Forever Wild possesses the sort of celebratory vibe of a band that’s in on the joke, but doesn’t feel superior at all to what’s going on in their music. There’s an honest feeling of love here, which was already evidenced on prior Crazy Lixx efforts, particularly 2017’s Ruff Justice.

And although there may not be a barnburner at the level of that album’s Jason Voorhees anthem “XIII,” the bulk of Forever Wild is comparatively more consistent. “(She’s Wearing) Yesterday’s Face” is heavy as hell in that Detonator­ era Ratt sort of way, while “Eagle” is straight-faced montage music ripped straight from the closing credits of a Rocky IV or Best of the Best sequel. Of course, the album’s crystal clear and polished production ensures that all of these songs do maximum damage. Some may say it’s over-produced, but that’s all part of the charm, right? Simply stated, Crazy Lixx is the best band going for this style—a legitimately awesome look in the rearview with enough ideas of its own to stand tall as a band to celebrate and support. Get stoked. ~ George Pacheco