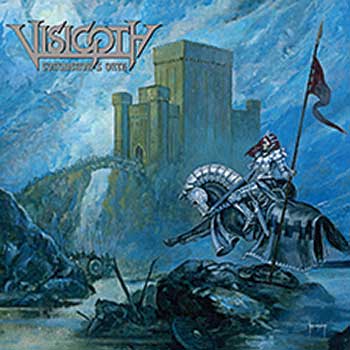 EPIC METAL: One wouldn’t necessarily expect Salt Lake City to be the source of one of the finest purveyors of traditional heavy metal in the continental United States, but Visigoth knows how to do some serious castle storming. Their full-length debut, The Revenant King, found them forging their identity in steel. On Conqueror’s Oath, they prove themselves worthy of wielding the blade. This music is as triumphant as it gets. Equally influenced by 80s troopers like Armored Saint and Manowar as they are by more recent crusaders like HammerFall, Visigoth’s muscular brand of traditional metal stands tall above pretenders to their throne. Power chords deliver giant hooks and soaring vocals deliver awesomely cheesy lyrics on songs like “Silver and Steel” and “Warrior Queen.” The band members have clearly read their share of fantasy literature. There’s even a song about the film Highlander called “Outlive Them All.” While the songs tend to stick to the same galloping tempo, they do take a brief detour into boogie rock with a funky tribute to their hometown, “Salt City.” It’s all totally un-ironic. While the subject matter (and music, for that matter) may seem silly, they approach it with the utmost earnestness, embracing the potential goofiness and infusing it with their sheer love for the style and stories. ~ Jeff Treppel