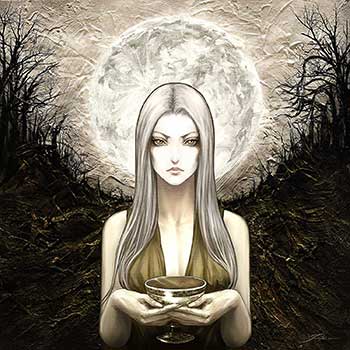 ALL HELL
The Witch’s Grail

DEATH PUNK METAL: What’s most appreciative about All Hell’s approach to the swirling of genres is how the jaggedness usually associated with bouncing between a variety of sounds is smoothed out. The Asheville, North Carolina trio primarily cherry picks from D-beat punk, crusty hardcore, thrash, black metal, and gothic death rock with the result falling into territories associated with the soundtrack to a raucous blowout at the local biker gang’s clubhouse. Sharing the stage with a broader number of bands has obviously widened All Hell’s sonic wingspan. Lead-off track proper “Sorcery and Sanctity” and “Tonight We Ride” are oozing with high in the saddle skittish punk, and by the time they get to “Where Devils Once Danced,” it sounds like Danzig digging in and down picking through Cleopatra Records’ vault before a lunge right into melodic black metal mire with “Fleurs du Mal” and some punked out Samhain on album closer “The Invisible World.”

Where The Witch’s Grail comes up short is that the rapid-fire precision picking and pedaling riffs vocalist/guitarist Jacob Curwen delivers are hindered by a guitar tone devoid of weight and density. Space has always been a very handy element in the creation of the dank moods and eerie expression in genres like post-punk and death rock, and All Hell makes effective use of fluttering guitar and bass and linear drums in the songs that call for it. Not making adaptive moves to drop more oppressive sonic cinder blocks when called for in the Tragedy-lite “Black Blood” and valiant attempts at giving the second half of “The Invisible World” an epic, rolling over the mountains surge has too much of the album feeling too empty.

So, think back to that biker bar blowout mentioned in the opening. When the gang’s prospect members get assigned to clean up duties, chances are they’ll be amazed at the amount of broken glass and pool cues, but will likely be expecting to see more blood, busted bones, and shattered teeth. ~ Kevin Stewart-Panko