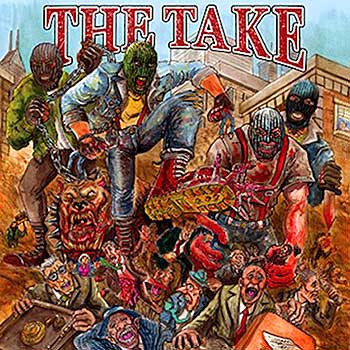 OI! MATE: Featuring former members of Biohazard, Cro-Mags, Madball, Agnostic Front, and other bands whose neck and hand tattoos aren’t fashion statements, The Take combines the gristle and grit of NYHC and the calloused pogo of British Oi! on their self-titled debut. And if our editor-in-chief wanted to limit the word counts on these reviews, that first sentence would certainly do the trick as its cursory explanation is sufficient enough to tell the story of this record. However, a few things need to be pointed out about The Take, chiefly, just how goddamn catchy these songs are!

Their sound, as a conglomerate of influences, is quite familiar—strains of punk and hardcore from the two nations that invented the stuff with streetwise gruff colliding with as little friction imaginable with the dance-friendly din working class skins used as background whilst abusing their livers and/or cashing their dole checks back when Maggie Thatcher was taking the “united” out of the United Kingdom. It’s what vocalist/guitarist Scott Roberts (ex-Biohazard, Spudmonsters, Cro-Mags) does here that gives ‘em a leg up on the competition. His voice may be on par with a bear straining to do its business in the woods while gargling sawdust, but he takes that oral full-court press and churns out what are generally remarkably infectious vocal phrases.

“The Skins are out Tonight,” “Class War” and “Elitist” are all simplistic two-steppers that only the most soulless of human beings won’t have worming into their auditory canals and humming while cooking dinner. The “whoa-whoa” and “Oi! Oi! Oi!” backing vocals—presumably courtesy of drummer Will Shepler (ex-Madball, Agnostic Front), bassist Carlos Cognote (ex-Royal Hounds, Legion 76), and a bunch of their drinking buddies—add both an anthemic charm and the sense that you’re dealing with a surly gang of toughs you wouldn’t want to encounter in a dark alley or at least have to wrestle the last copy of remastered Victim in Pain away from on Record Store Day. Additionally, Roberts’ guitar solos are as emotive and memorable as they are varied and technically adroit, which adds an edge that most bands of this ilk just don’t have.

The only discouraging aspect of this record is how front-loaded it is. The exact point the wind stops pushing through the sails is the spoken word part in “Revolution Now” after which the remaining songs lack the same vivacious verve and energetic élan of the album’s first two-thirds, including the manner in which closer “Pray for a Miracle” fizzles out and ends the album with a whimper instead of the promising bang most of the rest of it provided. ~ Kevin Stewart-Panko