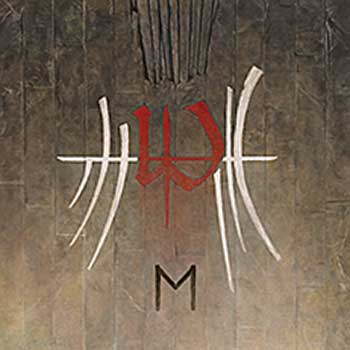 PROGRESSIVE VIKING METAL: Enslaved has sailed its longboat far from the shores of convention at this point. Twenty-six years into its career, the Norwegian act has largely left behind their black metal beginnings. The blastbeats and evil hissing make appearances, but on E (which looks like an “M” in runic language), those forays into the dark side are part of a larger progressive palette. It certainly has less of those aspects than 2015’s In Times. Instead, they really lean into the Opeth style prog twists and Viking death march tempos. At times, like on “The River’s Mouth,” they even venture into Mastodon territory. It always sounds like Enslaved, though. This is meant to be listened to on headphones so the listener can really appreciate the all-encompassing sonic world they’ve designed. “Storm Son” opens with a primal sound collage that pulls you in, conjuring images of forests and primitive civilizations before launching into some jazz fusion guitar. They don’t just limit themselves to traditional instruments. “Sacred Horse” tunes down the keyboards to sound like 70s rock organ, while “Hiindsiight” and “Feathers of Eolh” bring in flutes and a saxophonist. Simultaneously throwback (both to the 20th and 12th centuries) and utterly modern, E continues Enslaved’s evolution into whatever the hell they want to become. ~ Jeff Treppel