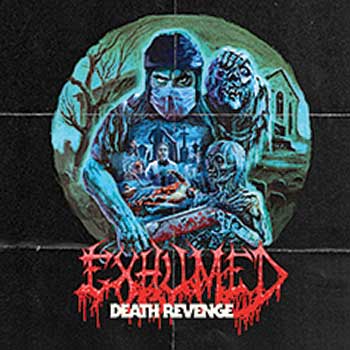 CLASSY CARNAGE: Death metal concept albums aren’t exactly a dime a dozen, never mind one as effective and razor-sharp as the latest from California’s Exhumed. The sound of Death Revenge is one of a band that knows exactly what they are and how to properly execute a musical battle plan to their precise specifications. That plan is to compose morbid symphonies of gruesome, gore obsessed grind/death in the vein of classic Carcass and meld it with the high minded arrangements and attitude of Metallica. Exhumed has always taken pride in balancing their compositional abilities right alongside their technical acumen, realizing that even the gnarliest riffs are nothing without proper pacing, production, and mood. Chalk this attitude up to the band’s leader Matt Harvey, who has led the charge for Exhumed ever since forming the band back in 1990. Harvey isn’t just an axe wizard. He’s a man with a plan and an uncompromising vision of what he wants to achieve, with Death Revenge serving as the proverbial proof in the pudding. The album is simultaneously vintage and modern—a heavy and relentless assault light years away from anything clean, clinical, or safe. In other words, Death Revenge is just what the (mad) doctor ordered. ~ George Pacheco