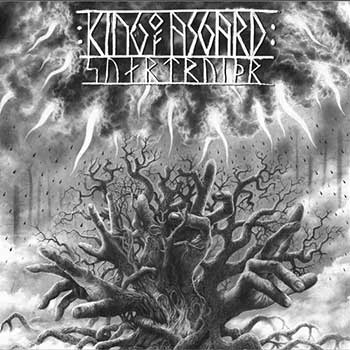 MELODIC DEATH AND BLACK METAL: Allow your mind and body to be taken on a journey through eight songs and 58 minutes of melodic death and black metal courtesy of Sweden’s King of Asgard. On Svartrviðr, the band’s fifth full-length album, there are plenty of intricate and epic guitar melodies, repeated hypnotic riffs, and sprawling soundscapes of Nordic inspired darkness. With nine and a half minute opener “Frôor,” they could be accused of being self-indulgent, but the song builds with each element of instrumentation added, and the guitar solos towards the end and the low growls really set the track off.

Drawing on their roots for lyrical inspiration, there is definitely a Viking vibe to the chord progressions, and it’s easy to hear why the band has been referred to as Viking or pagan metal. They are called King of Asgard, after all. But there is also a big element of classic black metal to their sound—the ruthless drive and double timed repetition of the guitars in the opening part of “Rifna,” or the down and dirty vocals in the dramatic finale “Hæimr,” a highlight of the album. As the track reaches its hectic climax, the haunting chorus-like vocals soar in the background before the sudden change in pace sets the heart racing. A perfect way to end before the transition into the folk metal introduction of “Kvikr.”

This mix of genres certainly makes for a more interesting listen than your standard Viking death metal record. The vocals are impassioned and gruff throughout, either growled or half screamed, further lending an evil vibe to the overall sound. Amongst the brutal vocal delivery, grueling guitars, and rhythm section there are moments of melody—beautiful little licks or soaring sections that break up the experience.

The fact that the last two tracks are entirely instrumental says a lot about the experimental nature of the band. Penultimate song “Harmdauor” is folk-driven, acoustic, and repetitive until it suddenly switches up and gets heavy, whereas last track “FæigR” is slow, beautiful, and haunting with dramatic minor inflections on piano to create an eerie atmosphere.

While Svartrviðr can feel a little long in places, there’s something for every type of metal fan here. Although this means some tracks might not be enjoyed by all and this isn’t an entirely original concept, King of Asgard has delivered its own blend in a unique way—a solid fifth album from a band that continues to develop in new and intriguing ways. ~ Becton Simpson

IN COLD BLOOD: Legion of Angels