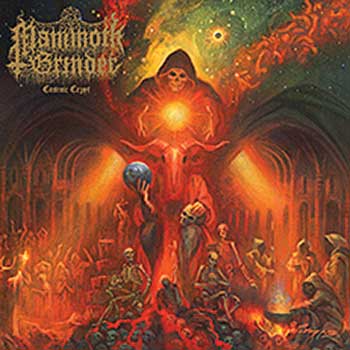 FILTHY DEATH METAL: It’s a pretty good bet that any band called Mammoth Grinder ain’t playing pop punk. Considering that its roster consists of dudes from Power Trip, Iron Reagan, and Darkest Hour, and their latest release, Cosmic Crypt, features cover art from the legendary Joe Petagno (Motörhead, Autopsy), you’d win that wager. It’s a gnarly dose of filthy Texas death metal with a steaming helping of grind and D-beat hardcore thrown in. Fortunately, it was mixed by Arthur Rizk (Power Trip, Cavalera Conspiracy) and mastered by Toxic Holocaust’s Joel Grind, two guys who know how to make this stuff sound gloriously gross. You basically have a murderers row of modern extreme metal luminaries who worked on this thing. It shows. With the album clocking in at 28 minutes, Mammoth Grinder clearly learned its lesson from Reign in Blood. Get in, give the listener what they want, and get out. Nothing quite as catchy as “Angel of Death” here, but fans of early Death and Autopsy will find plenty to love in each two minute burst. Tunes like “Blazing Burst,” “Superior Firepower,” and “Rotting Robes” sound like cavemen beating each other to death with femur bones and then pausing for a quick guitar solo. What they do is ugly, but this Texas trio is damn good at what it does. Death metal fans are the luckier for it. ~ Jeff Treppel